The blame game at Mthatha Depot

Drug stock-outs are a national crisis and the Eastern Cape has felt the effect even more acutely in the last few years a result of catastrophic decision-making by the Eastern Cape Department of Health. As recently as May 2015, National Health Minister Dr Aaron Motsoaledi was forced to return from an international trip to address critical drug stock shortages in the country. Motsoaledi has stated on record that drug manufacturers are sometimes to blame for the shortage, but civil society organisations belonging to the Eastern Cape Health Crisis Action Coalition (ECHCAC) have found that it is supply chain management issues that are crippling the Eastern Cape Health Department’s ability to dispense lifesaving medication to people living with HIV and TB.

At the department’s Mthatha Depot, the situation was exacerbated by the poor management of a human resource issue resulting in the depot facing a shut down in November 2012. NSP Review visited the depot to ascertain the level to which it had recovered from this crisis and found that many of the problems identified in 2013 persist. Employees at the depot spoke to us on condition that they remain anonymous.

Nkandla-style security:
Security at the Nelson Mandela Academic Hospital and at the depot appears lax. On arrival, the NSP Review team was allowed access without question from the security guards at the gate. At the depot, where security upgrades appear to be underway, we were required to sign in but were not searched on arrival or departure. Biometric finger print machines installed at the entrance of each section of the warehouse, we are told, are not yet connected. Following massive stock theft uncovered in 2011, and a fire, allegedly set by staff members, hidden cameras have been installed on the upper level of the warehouse, where needles, gloves and swabs are housed, but not on the lower level, where the antiretroviral (ARV) and TB medications are located. There are, apparently, plans to move these high-cost, high-demand medicines to the upper level but it is unclear when this will happen.

Mthatha Depot, obligated to carry medicines on the Essential Medicine List, including ARVs, TB and other chronic illness medications, services 14 sub-districts in the Eastern Cape and supplies approximately 470 registered facilities. Around 95 percent of these facilities are primary health-care facilities staffed by registered nurses and community health workers. The remaining 5 percent consists of approximately 30 hospitals. Each of these facilities places monthly orders, with provision made for occasional emergencies. When the system functions optimally (rarely), facilities hold six weeks’ supply of medicines, allowing them a buffer of about two weeks between orders.

A source confirms that in the majority of facilities, orders for medication are still processed manually. He says the health-care facility faxes an order to the depot where the information is captured by clerks, but that procurement processes are thwarted by the lack of infrastructure and skilled personnel. He complains that it is impossible to place orders to suppliers via email when the server, which is housed in a different building in town, goes down – a regular occurrence. When telephone lines go down as a result of cable theft, another regular occurrence, orders are not received and cannot be sent to the suppliers.

Shortage of skilled personnel:
The most acute problem is the lack of qualified pharmacists. In the sub-districts that the Mthatha depot services, there are only two pharmacists to cover more than 100 health-care facilities. According to a source, Qaukeni District has never had one. Ideally, each health-care facility should have a pharmaceutical manager and a pharmacy assistant but many have neither. Instead, nurses – who are already stretched to capacity with tasks involving patient management, prescribing and dispensing medication (which should be done by a doctor) – are required to place orders for those medications as well. “Many complain that they are already overburdened with tasks that are not central to their work and that they do not have the required training to carry out the work of a pharmacist,” says our source.“There is a level of apathy (‘it’s not my job’) and just not having the time and training to do it.”

According to the MEC for Health in the Eastern Cape, Dr Pumza Dyantyi, 40 pharmacy managers, 48 pharmacist assistants, and directors for both the Port Elizabeth and Mthatha depots were appointed in 2014/15. She says that nurses have received sufficient training and should be able to place accurate orders. But this is not necessarily the case. Our source tells us that medicines are ordered haphazardly; some clinics are overstocked and others under-stocked. “In some instances,” he says. “The clinic requirement is for 1000 doses of a particular type of medication, which are contained in 100 vials. However, hospital personnel place an order for 1000 units which leads to overstocking. The medicine needs to be returned but because of the administrative burden, many facilities simple hold the stock. This creates severe stock shortages in other areas, leading to the disposal of expired medication.”

In an effort to control overspending in the department, a moratorium was placed on new appointments, leaving the depot with a severe shortage of skilled staff and just one pharmacist.

To further exacerbate the problem, staff who believed they were owed performance bonuses, went on strike in November 2012. The result was stock shortages of critical medicines at health-care facilities serviced by the depot. Médecins Sans Frontières (MSF) and the Treatment Action Campaign (TAC) intervened in January 2013 to assist. The non-profit organisations deployed 20 volunteers who packaged, loaded and dispatched medicines to clinics across the province. However, this apparently caused friction among the remaining employees at the depot.

It was presented as if the TAC and MSF were alone at the depot and that department members were not committed. We are here to serve people,” says a senior depot employee. “We are not here to be scoring points.” “You called the new superintendent general Dr Mbegashe to come and account as to what are the strategies he had in mind,” he says. “There was an accusation that the superintendent general had no direction. They even said they sacrificed during December and that depot staff did not care. But I was here working shoulder to shoulder with them throughout that period.”

The emergency intervention lasted for three months after which the depot was handed back to the province. But the situation has not yet normalised. Stock shortages are still reported across the province. A supply chain manager and a deputy director of finance have recently been appointed, which should alleviate the problems faced by the facility. However, these individuals will have the Herculean task of making sense of the manual system that clinics use and ensuring that this is integrated with the depot’s electronic system.

A volunteer healthcare worker tells the story of a young boy confined to his bed since he was a young child, as a result of the shortage of physiotherapists and occupational therapists in the rural Eastern Cape. This is a first-person account of the rigours of rural health care, in which it takes extraordinary effort to secure even the most basic services.

On 25 and 26 March 2015, the South African Human Commission held a hearing on access to Emergency Medical Services in the Eastern Cape following a complaint from the community of Xhora Mouth and months of advocacy and analysis from the Eastern Cape Health Crisis Action Coalition. People from across… 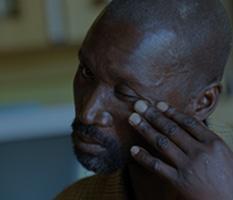