The GeneXpert tuberculosis (TB) test promises to revolutionise TB detection in South Africa. But will the rollout and implementation of this new system be good enough to fulfil its potential?

“If a minister can do it, it can’t be that hard,” said Health Minister Aaron Motsoaledi in March 2011 as he launched the rollout of the GeneXpert MTB/RIF® test for tuberculosis (TB). The diagnostic system is set to become the first-line test for diagnosing active TB throughout South Africa. GeneXpert is to replace microscopy, a 130-year-old method in which lab technicians study sputum samples under microscopes to identify TB bacilli.

The new system is completely automated. It is less labour intensive, gives a result in two hours, and is less prone to contamination and human error. But most importantly, GeneXpert is more sensitive than microscopy. It identifies TB and drug resistance at the same time and can be used in settings where resources are scarce.

Exactly two years after the launch, 203 instruments have been put in place. 1,180,669 tests have been carried out across all nine provinces. Case detection for individuals suspected of having active TB infection has increased to an average of 14% and detection of drug resistance stands at an average of 7%. A further 65 machines await implementation. Once South Africa has full GeneXpert coverage, this should allow a national capacity of 11,428 tests per day.

Dr Dimakatso Moloi, Chief Director for TB in the Gauteng Health Department says that the new system “is helping a lot, particularly for drug-resistant TB [DR-TB]. There was an increase in diagnosis of resistant cases unlike in the past when we had to wait six to eight weeks [for results]. The [DR-TB] rate was also as high as 6% [whereas] cases diagnosed through [sputum] culture … were never above 2%.”

While the GeneXpert machine itself is relatively easy to operate, as demonstrated by the Minister in 2011, implementing and integrating the machines into the health system is proving to be less simple.

Machines have been placed in provinces according to their TB prevalence. The Eastern Cape currently has the highest capacity, followed by KwaZulu-Natal and Gauteng (see Figure 1). Yet if we compare monthly test results, KwaZulu-Natal significantly outperforms the Eastern Cape (see Figure 2). Similarly, Mpumalanga has more capacity than the Free State and North West provinces, but both provinces significantly outperform Mpumalanga. Gauteng has 38% more capacity than the Western Cape, yet only performs 10% more tests.

According to the National Health Laboratory Service (NHLS), variations in the testing volumes across the provinces are due to several factors. Global shortages in the supply of GeneXpert cartridges during July, October and November 2012 not only delayed the rollout but also interrupted testing across the country.

“We’ve had a GeneXpert [machine]… in Chris Hani Baragwanath Hospital for many months now,” says Bonginkosi Mthembu from the Treatment Action Campaign (TAC) in Ekurhuleni, “but the machine has been gathering dust … because apparently there are no cartridges…”.

Despite an assurance from Cepheid, the cartridge supplier, that the NHLS has first priority, further shortages occurred in February and again in March 2013.

“Due to global shortage in the supply of Xpert MTB/RIF® cartridges in … February and March, all sites installed from January to March 2013 only resumed testing in April 2013. Priority was given to … [supplying cartridges to] existing testing sites … whilst the issue was being addressed with the supplier,” according to the NHLS. The NHLS has also noted that the shortage has been resolved and should cause no more interruptions.

However, with still more instruments to be placed in South Africa, and more countries implementing the GeneXpert system, the lack of cartridges remains a real concern. 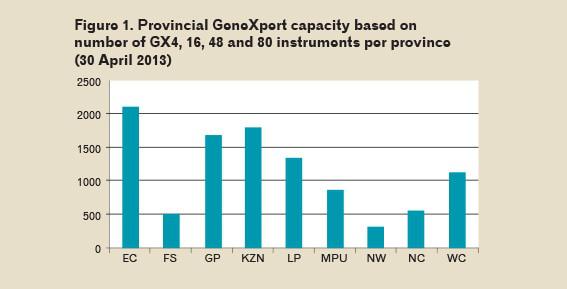 While the rollout of the GeneXpert machines has been rapid, the same cannot be said for the training of health workers in the GeneXpert testing algorithm This training has been particularly slow and facilities cannot deploy the automated system before staff have been trained how to use it.

The Western Cape uses a different testing algorithm from the rest of the country and does not depend on the National Department of Health (DoH) to conduct training for health workers. This partly explains why the Western Cape is performing better than the other provinces.

Lusikisiki in the Eastern Cape, for example, has two GeneXpert machines: one at the St Elizabeth Laboratory and one at Holy Cross Hospital. The instrument at St Elizabeth was not functional at the time of writing this article.

“This was due to the fact that the hospital does not have money to train nurses … to read and interpret the GeneXpert results for clients,” according to Zukile Madikizela from the TAC. “When I last checked … Lusikisiki TB clients were [being] turned [away] by Holy Cross … [as the facility was becoming overcrowded].”

In its February 2013 reports on the progress of GeneXpert implementation, the NHLS also reported that the DoH training of health workers in the clinical algorithm had been delayed.

The diagnostic algorithm (see Figure 3) is seen as too complicated and this has led to provinces using different versions.

In South Africa, GeneXpert is used to screen all patients suspected of having active TB and, in time, it will replace microscopy as a first-line diagnosis. However, GeneXpert cannot distinguish between live and dead bacilli and therefore cannot be used to monitor the progress of TB treatment.

In addition, due to the phased rollout of the automated system, two treatment algorithms are currently in use: the old one for microscopy and the new one for GeneXpert. Testing and clinical algorithms also vary across provinces. This disparity leads to confusion in all aspects of the testing cycle and puts an extra burden on the patient. South Africa urgently needs a simplified clinical algorithm and a massive scale-up in training for both laboratory and clinical staff.

GeneXpert for HIV-positive people and for children

The GeneXpert test has shown a sensitivity of 90.4% and a specificity of 98.4%.* It has been endorsed by the WHO for use on adult sputums. Yet the instrument performs less well when it is used to test HIV-positive people and children.

TB in children is rarely confirmed because the sputum samples contain very few bacilli, and because of the difficulty of obtaining high-quality specimens. A recent study in Vietnam reported that GeneXpert detected TB in 50% of the children tested. Compared to smear microscopy, which only detected 37.9% of the cases, this is a great improvement. But it still poses a problem in that only 1 out of every 2 cases will be identified.

A similar problem affects people who are HIV-positive. HIV infection is associated with more smear-negative and paucibacillary TB disease, and the Xpert MTB/RIF® test is less sensitive with smear-negative samples.

According to a Cochrane review published in February 2013, GeneXpert sensitivity for smear-negative TB is 68%, a figure significantly higher than the sensitivity of microscopy. But the problem is that in a population which is more susceptible to TB due to suppressed immunity, the best available tool for TB diagnosis is far from ideal.

More research is desperately needed to improve diagnosis of TB in children and in HIV-positive people.

[caption id="attachment_1489" align="alignnone" width="567"] Awaiting trial detainees waiting to be tested for tuberculosis at Pollsmoor Prison in Cape Town. Photo courtesy of Gallo Images, The Times, and Shelley Christians[/caption] South Africa stands at a crossroads in the fight against tuberculosis. An important victory in the Constitutional Court has affirmed the…

[caption id="attachment_1494" align="alignnone" width="567"] Photo by Chelsea Maclachlan, courtesy of the Treatment Action Campaign Archive[/caption] By getting involved, you can ensure that AIDS Councils improve the quality of tuberculosis services in your district Step 1: Get involved One of the key ideas in the NSP is the provision of structures…

2 Responses to “GeneXpert: An imperfect rollout”