There was recently a small celebration in one of the primary care clinics in Khayelitsha. One more person was officially declared cured after more than two years of treatment for pre-XDR-TB (extensively-drug-resistant TB). It may not seem especially significant for the locals who are used to the fact that, for many years now, patients with multidrug-resistant TB (MDR-TB) have been diagnosed, treated, monitored, supported and, half of the time, even cured in the primary care clinics in Khayelitsha. But for those who know the difference between MDR-TB and XDR-TB, this is hugely significant given that the chance of a cure for someone with pre-XDR and XDR-TB is less than 20%.

Siyabulela was one of the earliest patients to be enrolled onto a pilot project specifically aimed at improving outcomes among people with pre-XDR-TB and XDR-TB, and among those in whom MDR-TB treatment is failing. The pilot started just over two years ago in Khayelitsha and Médecins Sans Frontières (MSF) joined the local clinic staff to congratulate Siyabulela on being the fourth patient enrolled onto the pilot who has now been cured of this disease.

Tears pricked the eyes of all who listened to him as he recounted the difficulties of dealing with the shock of the diagnosis (‘But I’m not even HIV positive … ’ he said), the horrendous daily side effects of the treatment, the stigma of being labeled a ‘bad TB patient’ who brought the disease upon himself (despite never having had TB before), and the willpower needed to drag himself to the clinic every day to wait for the pills, which he was told may or may not cure his disease. The clinic staff and community workers who supported him in completing his treatment deserve to feel proud of this achievement, also their achievement, on this day. Siyabulela was not always the easiest person to convince that this was his only option if he wanted to live to fulfill his dream of going to university. It was a touching occasion, a small recess in the battle to detect, treat and eradicate DR-TB, from the local community at least.

But just as everyone was patting each other on the back and helping themselves to more cake, a recently diagnosed XDR-TB patient stood up and gave a speech to remind us that this battle is far from being won. Goodman’s voice was shaking as he tried to express the anger inside him, and asked to whom he should best direct it. Everyone looked at their feet. Although Goodman was happy for Siyabulela, he demanded to know what else was left to celebrate. He wanted to know why Siyabulela was so thankful.

Was it because he was offered a drug regimen, which the doctors thought might work, but they couldn’t be too sure, and he just had to take it anyway and wait and see whether these were the last years of his life?

Was it because he was considered eligible, that he qualified, that he was lucky to be in Khayelitsha so that he could get the drug Linezolid, which is too expensive for his own government to make available for people without medical aid in his country?

Goodman wanted to know what happens to the poor souls in Gugulethu or in Soweto who also happen to breathe in this terrible bug on their taxi ride to college? Was Siyabulela thankful because he was told to swallow 20 tablets every day for two years, and to expect to have numerous horrible side effects, which he had to just push on through, and count himself lucky because there were no other options? Or in the end, was Siyabulela thankful because he was not one of the other four people who started the same treatment for the same disease at the same time as him, and who are all now long dead?

Goodman wanted to know why, if there are thousands of people being diagnosed in South Africa every year, he had never even heard of DR-TB. He is a diabetic patient who has attended his local clinic at least every month for many years; how can it be that the first time that he hears of DR-TB is when he is infected with it?

If this disease really is the killer bug that people get from just breathing, shouldn’t people be shouting about it from every clinic, taxi, shebeen, school and overcrowded shack in Khayelitsha? Shouldn’t they be demanding to know why they can get ARVs if their viral load is 350, only to still be at risk of dying of TB?

Shouldn’t they be demanding to know how to protect themselves and their families from an airborne disease that affects everyone regardless of race, gender or behaviour?

And shouldn’t they be demanding access to rapid diagnosis and effective treatment if they are unfortunate enough to breathe in the wrong place at the wrong time?

Goodman ended his speech by thanking God that at least he was diagnosed in a place where he can do the right things to ensure he is one of the few who qualify for access to the best treatment that is currently available, for a slightly higher chance of cure; but it doesn’t mean that he is happy about it.

Part of the reason I became a doctor was to affect the lives of individual people, hopefully lots of individual people. Siyabulela’s cure makes me happy to be a doctor, but the looks on the faces of the others, who started but didn’t finish their treatment journey with Siyabulela, when they realised there really was nothing more I could offer them – sometimes make me wish I became a water engineer or a city planner or a school teacher instead.

How insignificant is the impact of doctors and nurses who have nothing to offer patients but a 20% chance (at best) to live. How embarrassing for a government to have the means and resources to develop and deliver better treatment to combat a disease that kills but which can be cured, but not to have the political commitment to prioritise it.

How unjust for a doctor to have to decide between two individuals and choose who is more deserving of a potentially life-saving drug, which is too expensive to provide for both. How frustrating to endure the pitying looks of others when I tell them one of the highlights of my year so far is that we have managed to cure a fourth patient of a disease that is infecting thousands and killing hundreds, and spreading like wildfire every time someone sneezes.

But I have been told that we should consider ourselves lucky working with DR-TB patients in South Africa, specifically in Khayelitsha. We have, at least in theory, easy access and enough resources with the capacity to screen, diagnose and treat the majority of suspected prevalent TB and DR-TB cases. Many other areas of the world don’t even

“How embarrassing for a government to have the means and resources to develop and deliver better treatment to combat a disease that kills but which can be cured, but not to have the political commitment to prioritise it.”

have access to a diagnostic laboratory test, never mind drugs to treat the disease.

Once patients have been diagnosed with DR-TB in South Africa, most of the WHO-recommended treatment options are available to treat patients, should they want the treatment. Most of them do once they have been educated about DR-TB through the relatively widely available network of trained support workers. Again, this access to information is a luxury, considering the resources available in many other countries with an equally high burden of the disease.

And for those patients with pre-XDR-TB and XDR-TB, there are plenty of stakeholders who are at least interested, aware and, sometimes, even committed to accessing the best treatment available in the world to offer them the best chance of cure.

And yet still, despite all of these ‘luxuries’, treatment outcomes in South Africa remain the same as, if not worse than, everywhere else in the world; a less than 50% treatment success rate, and a default aret of at least 30%.

Alongside these regimens, the extreme commitment should be to put systems and resources in place to ensure access to rapid diagnostics, which are available, to quickly identify those in need of the better treatment regimens. These same systems should ensure that the treatment actually gets to all those who are diagnosed, and not only the lucky few who happened to be in the right place at the right time. Only then will people not be afraid to come forward to be tested for a disease, which does indeed belong in the Dark Ages.

So, even working in Khayelitsha, I don’t consider us very lucky at all. I’m tired of sticking plasters over gaping wounds. Give me something I can really work with.

Adherence to DR-TB therapy is essential for treatment to be successful. Poor adherence may result in unsuccessful treatment outcomes, and the infection of other household and community members. In addition, resistance to an increased number of drugs can develop. At the MDR-TB think tank held in Johannesburg in early April…

South Africa is one of the few high burden countries where DR-TB case detection is reported by the World Health Organization (WHO) to be more than 100%. Based on a DR-TB prevalence survey conducted in 2002, the WHO estimates that there should have been between 6 500 and 10 100… 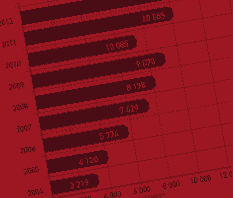 One Response to “Dying for better treatment”