Home Blog Edition 8: NSP in general Why are there no medicines at the clinic?

Why are there no medicines at the clinic?

When patients go to clinics or hospitals many are told that the medicines they need are unavailable. Why does this happen and what can be done about it?

The Treatment Action Campaign (TAC) regularly responds to complaints about stock-outs of essential medicines at health facilities. On some occasions, patients have suffered because they have been unable to obtain antiretroviral (ARV) drugs. At other times, clinics have run short of TB medicines and basic pain medications.

When TAC helps with complaints like these, we first try to communicate directly with the staff at the facilities and depots involved to find out why medicines have not been delivered. At other times we have had to ask the Department of Health to provide emergency stocks of ARVs when provincial structures have failed to do so. What these cases reflect consistently is the deplorable state of our provincial health systems, the lack of management skills at all levels, and a lack of political will to address weaknesses directly.

Nonyameko Ntiyo (38) was without antiretrovirals for three months because of stock-outs at the village clinic in Lusikisiki in the Eastern Cape. Ntiyo, who is taking ARVs and anti-TB medication, said that the doctors had changed her treatment regimen. She was supposed to receive AZT, Aluvia and 3TC. However, no Aluvia was available from February to April 2012. During this time Ntiyo fell ill and spent almost two weeks in hospital.

“Every time I went to the clinic I would be turned away without any pills. Aluvia (lopinavir/ritonavir) was always not available. It cost me R17 to get to the clinic by taxi and when I didn’t have [the] taxi fare I walked for about an hour to reach the clinic. I would sometimes ask my dad to fetch my pills for me when I became too weak to go by myself,” Ntiyo recalls.

She says her health deteriorated rapidly and matters only improved when her friends and neighbours reported the stock-outs to the TAC office.

“That is when things started to change,” she says.

“The clinic gave us two weeks’ supply and we had to come back for more when they were finished, which meant I had to go to the clinic twice in one month. Sometimes the nurses would also try to assist by sending one of their staff members to the Gateway Clinic, but they would do that only after we became aggressive and firm with them. Otherwise they just told us to go ourselves in search of ARVs,” says Ntiyo.

She says some patients gave up trying to access their medication.

Ntiyo says the pharmacist did not explain to them that alternatives were available and was sarcastic to her. The pharmacist said he was not in the business of manufacturing pills, only receiving and distributing drugs.

“We must thank TAC for educating us that we can stand up for our rights,” she said.

The clinic that Tholakele Mhleshe (64) relies on frequently runs out of antiretrovirals (ARVs). The lack of consistent treatment may have contributed to her contracting tuberculosis and losing weight, along with a plummeting CD4 cell count. Mhleshe tested positive for HIV in 2007 and started taking ARVs four years later at the SAPPI Clinic, near her home in Mthethwa, KwaZulu-Natal.

According to Mhleshe the stock-outs started last year and have become more frequent. “That was when I started getting sick and contracted TB, lost a lot of weight and became very weak with my CD4 count dropping significantly,” she recalls.

Mhleshe said patients at the clinic would often share experiences about how the lack of treatment was affecting their health.

“We would be told to go to Ethembeni Clinic by the nurses and a return trip would cost me R50. This is too much for me. I had to try not to add it all up because I knew this concerned my life”.

From the factory to the patient

The distribution supply chain for drugs is long and complicated. Things can go wrong at various points along the way.

The distribution chain described above has many links. At each point in the chain, good management is required to ensure that the medicines flow as they should. Many of the recent stock-outs in South Africa are likely to have been caused by poor management at various points along this complex chain. 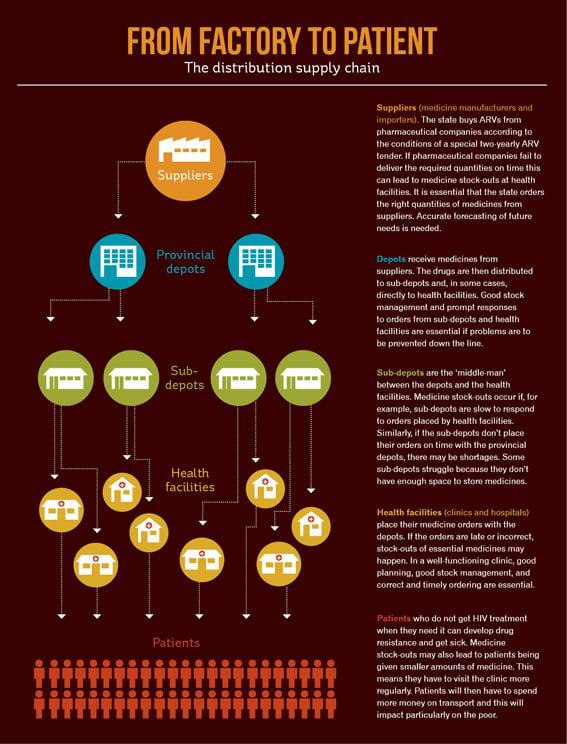 How do we solve the problem?

Improving the quality of medicine distribution cannot be achieved immediately. In the long-term, the Department of Health must ensure that more qualified and capable people are put in charge of medicine distribution, management and budgeting. In the shorter-term a number of structural changes and technological solutions could be implemented:

The aim of this project is to provide patients, nurses and doctors with an easy way to report stock-outs either over the phone or via the internet. Reports will be fed into a central database and responded to as needed. All data will be anonymised and shared openly with the Department of Health and other parties. (Further details can be found at www.stockouts.co.za)

As COVID-19 cases begin to surge in the North West province one of the province’s leading clinicians has just been suspended for reasons that are unclear. Ufrieda Ho reports.

New data points to fears of contracting COVID-19 at congested health facilities as the primary reason for people not seeking needed care and defaulting on their chronic medication, including HIV treatment. Amy Green reports.

One Response to “Why are there no medicines at the clinic?”