Some of our key challenges include the centralisation of care in many areas of the country with its side effects; poor treatment success rate and high treatment defaulter rate; and limited access to new drugs to treat DR-TB. What are we doing differently to address these challenges? We are strengthening the decentralisation of MDR-TB services, we have organised workshops and meetings to draft and finalise policy on decentralisation of MDR-TB services and we have designed a tool for readiness assessment of facilities, as well as a monitoring and evaluation tool.

We also supported the development of provincial plans for decentralisation of MDR-TB care. Our target is to have one MDR-TB treatment decentralised site per district by 2016 and to strengthen community MDR-TB care. To date 38 districts have at least a treatment site, while 14 districts do not have any form of MDR-TB treatment initiation site. The number of treatment sites has increased from 11 to 63 since approval of the policy framework on decentralised management of MDR-TB. The Western Cape, KwaZulu-Natal and the Eastern Cape are moving faster than other provinces.

A grant provided recently by Global Fund and the United States Centers for Disease Control will help us train nurses as MDR-TB initiators. We are also aiming to have treatment linkage officers in each district to help us close the gap between number diagnosed and number initiated for treatment.

The treatment success rate has remained stagnant at 42% and the defaulter rate has been 20% on average over two years. Reasons for the low treatment outcomes are many, including poor linkage to care, poor tracing mechanisms and limited access to new agents (drugs) for treatment. In terms of new treatment agents I would like to comment about the use of Bedaquiline, Linezolid and Delamanid in South Africa.

My view is that Bedaquiline and Linezolid are within our reach. We shall seek to use Delamanid in accordance with WHO guidance notes and the decision by our Medicines Control Council. With these medicines available, we need to redesign our treatment regimens for MDR-TB and XDR-TB in order to include Linezolid and Bedaquiline.

Dr Njeka is director of drug-resistant TB, TB and HIV at the National Department of Health

Research, willpower and good administration could help halt the march of a disease that is striking down too many children: multidrug-resistant tuberculosis (MDR-TB). [caption id="attachment_2704" align="alignnone" width="519"] Thandi Chitha, a Grade 1 pupil at the Inkath- Ka-Zulu Primary school in Daveyton performs as she recites a poem. (Photo by Graeme… 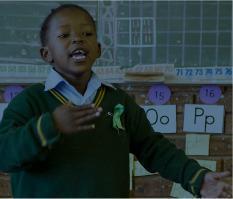