Over the past decade, South Africa’s HIV response has come a long way. However, more than 2.3 million people living with HIV in South Africa are still not on lifesaving antiretroviral treatment (ART) — either because they do not know their HIV status, or more worryingly having been diagnosed with HIV and possibly having started treatment and then stopped. One of the biggest challenges now facing South Africa’s HIV response is how to support many more people living with HIV to engage or re-engage and then stay on treatment.

One way to make it easier for people living with HIV to adhere to treatment is to provide a longer supply of medicines. It is well known that each time someone is asked to return to the clinic or spend an extended time at a clinic, there is an increased risk of that person disengaging from care. Taxi fares, long waiting times, and the fear of being shouted at at the clinic, can all drive people to avoid or be unable to collect prescriptions – something that has only worsened as a result of the COVID-19 pandemic. Longer supplies simply means fewer trips to the clinic.

Currently national government policy says that all people living with HIV should receive at least two months’ supply of ARVs, however, both the Department of Health and PEPFAR are committed to extend this to three months’ supply and eventually six months’ supply. We welcome this commitment, however, the rollout of longer supplies needs to happen much more quickly. (PEPFAR is the U.S. President’s Emergency Plan For AIDS Relief. It supports HIV programmes in South Africa.)

Data collected by the Ritshidze project from October to December 2020 shows currently most people living with HIV are receiving a two month supply of ARVs — yet worryingly, 18% of people living with HIV still reported receiving refills of one month or less. The Ritshidze project is a civil society collective that monitors healthcare services at 400 clinics and community healthcare centres across eight provinces in the country. 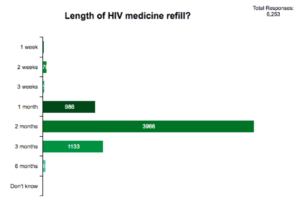 There is a substantial difference in length of ARV supplies given out across provinces that were monitored. The table below outlines the percentage of people living with HIV reporting one month or less supply per province, with a large variance amongst provinces.

When we look at facility level, some clinics are doing well, and ensuring longer supplies for people living with HIV, which is to be commended:

However, for people living with HIV at other facilities, the situation is far worse. The table Below highlights the facilities with the most people living with HIV reporting only one month supply. It is critical that the Department of Health and PEPFAR urgently investigate why these clinics are failing to provide at a minimum 2 months supply in order to urgently address the challenges.

So what can the Department of Health and PEPFAR do?

*Rambau and Xaba are both Project Officers with the Ritshidze project. This article was originally published by Ritshidze here. The dataset referred to was presented to an Operation Phuthuma meeting on 5th March 2020. You can view the full presentation here. For more updates from Ritshidze, you can follow them on twitter, facebook and instagram or go to their website at www.ritshidze.org.za

Note: The Treatment Action campaign participates in the Ritshidze project. Spotlight is published by SECTION27 and the Treatment Action Campaign, but is editorially independent, an independence that the editors guard jealously. The views expressed in this article are not the views of Spotlight.

Much has been reported on alleged corruption and governance failures in the Eastern Cape Health department that have devastating consequences for health services to those most in need. This is also true for inadequate Emergency Medical Services in the province. Nontsikelelo Mpulo and Thokozile Mtsolongo argue that solutions to the province’s EMS woes should start with improved spending of available budgets.

Public health emergencies place immense power in the hands of executive leadership. This can pose a risk of creeping authoritarianism. Professor Narnia Bohler-Muller and Dr Benjamin Roberts explore the lessons that can be drawn from the findings of the University of Johannesburg and the Human Sciences Research Council’s online survey on the public’s views on lockdown regulations.