COVID-19: Second wave was “like a tsunami”, reflects Tygerberg doctor

Her four-year-old twins Yusra and Haniya were being looked after by her mother.

On that day, 7 552 people tested positive for COVID-19 around the country.

Parker is in favour of tightening restrictions over Easter weekend – including introducing an alcohol ban – to decrease trauma admissions to hospitals, and to avoid the kind of social mixing that would trigger a third wave.

“So the second wave was like a tsunami,” she recalls. “I remember clearly when it started, it was the 13th of November, a Friday. We just had this steep rise of COVID admissions and within a week, our COVID high care wards were full. If I have to be honest, I think in the initial weeks we were totally overwhelmed. At Tygerberg at least we were blessed with an absolutely amazing team.”

Since January last year, Parker, one of three infectious diseases specialists at Tygerberg, has served at the coalface of South Africa’s fight against COVID-19. (Spotlight previously interviewed her in May 2020.)

Along with other healthcare leaders countrywide, Parker had to allocate limited resources to patients, cushioning death for those passing away; all the while gathering information and formulating protocols for how to best tackle this new pandemic.

In addition, she is working on a PhD on the links between HIV, obesity and SARS-CoV-2. “If there’s one thing we should emphasise, it’s that COVID is also an infectious disease of lifestyle,” she says. “It’s a wake-up call for us to start living healthily, to start exercising. Severe COVID is due to uncontrolled inflammation triggered by the virus. Through exercise, you can increase a key enzyme which can counteract this inflammation. My recommendation is for people to get out there, exercise, start running, eat healthily, because the majority of the patients who die from COVID or land up in critical care appear to be overweight.”

Parker is speaking to Spotlight through her mask inside Tygerberg’s buzzing cafeteria. Around us, people have removed their masks to eat. “Keep your mask on,” she says. “It’s safer.” She scrolls on her phone to find a birthday photograph circulated on their staff WhatsApp group. It shows Parker sitting against a wall, staring at her phone. “Happy birthday, Arifa. It is what it is,” reads the caption. “I’m in an office next to a high care ward,” she says, laughing. “It was a staff Teams meeting on my birthday.”

The doctor, eyes shining over her mask, laughs often.

Perhaps to dispel the discomfort always at the periphery of her job. Death is no easy subject. But, she says, while the second wave death rate had been overwhelming, she prefers to focus on the recoveries.

“It was bad in the second wave, brutal,” she says. “A lot of patients died, largely due to the overwhelming volume of admissions. Percentage wise the death rate was higher in the second wave, probably not because of the different variant but because hospital systems were overwhelmed by the sheer number of patients. At Tygerberg, the survival rate for the first and second wave was about 70 to 75%. If you are on high-flow oxygen, survival is approximately 50 to 60%. Once you are intubated, the prognosis is really poor. Not just at Tygerberg, across the province. Even in private and internationally.”

She adds: “I have to admit the second wave floored me. While I was covering high care, I would see, for example, that this could be me; this could be my best friend; this could be my husband. For me, the hardest was a 27-year-old male who came in, and you know, we’d done everything we could.” The patient passed away after developing the complication of Myocarditis, which is a weakening of the heart muscle due to COVID.

Was the patient profile different during the second wave?

“So I contacted the NICD (The National Institute For Communicable Diseases of South Africa) to discuss this,” says Parker. “The NICD put together a document that compared patients in the first wave to the second wave. And actually, it’s not different. It was just that the volume of patients was so high that we would see more younger patients, too.”

Deciding which patients would receive life-saving resources over others was heartbreaking – even though such decisions were informed by the Western Cape Department of Health’s Critical Care Triage Tool. The tool scores patients based on their prognosis, so resources can be used to help people with the best chance to survive.

“In a resource-poor setting, what they use is age, the presence of co-morbidities, illness severity, and so on to see whether ICU [Intensive Care Unit] care would make a difference or not. For example, if you only have one ventilator; from an ethical or triage scoring point of view, the ventilator would go to the patient who would benefit from it the most. It’s very difficult.”

Another hard lesson from the second wave was the importance of palliative care.

“So if you know that a patient’s prognosis is very, very poor, it might be kinder to offer palliative care earlier, as opposed to, you know, us doctors pushing and trying our best,” she says. “So a lot of these difficult issues actually came out. Some doctors are so reluctant to pass their patients over to palliative care, because they see it as failure, when it is actually providing the best to our patients in terms of dignity in their last days,” Parker says.

“At Tygerberg, our oncology department actually ended up stepping in to help with palliative care. So the nice thing about working at Tygerberg was that from the start we approached this as a whole hospital response, as a team effort. So almost every department in the hospital had a part to play in the COVID response. We had ENT [Ear, Nose and Throat] doctors assisting; dermatologists, who just normally look at skin, managing pneumonia; ophthalmologists, surgeons, plastic surgeons. All of these departments, led by the department of medicine, helped manage our patients. We just had to work together to get through it.”

This brings about a tension with the needs of other regular patients, for example people with TB or cancer. 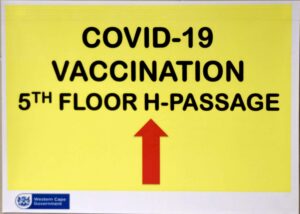 “So this is very, very hard again. The COVID wave was so overwhelming. As an example, our normal medicine admission rate would be approximately 20 to 40 patients a day. And for the weeks of peak COVID, we were admitting 70 patients a day. So you have double the patient load with the same number of staff. You know, staff are not going to fall out of the sky, we don’t have the luxury of creating new staff overnight. So something had to give. Thus we were forced to de-escalate certain services in order to escalate COVID services. That had to be done. There was no other way to do this. Like I said, if a patient is admitted with COVID, they are more likely to live than die as it is a treatable illness,” says Parker.

“I mean, if you don’t give a patient who needs oxygen, oxygen, they will die. So after the first COVID wave, we saw a lot of neglected TB cases and other illnesses. So there’s a lot of ethical issues that come to play.”

“There are ways to manage a pandemic. You can flatten your curve. So maybe if we did the alcohol ban earlier in December, there would have been less mixing and our curve would have been flatter. Simultaneously, we need to raise the health care line, for this we need three things: staff, stuff and space,” she explains.

“Our big problem is staff. The stuff we have, we have enough PPE [Personal Protective Equipment], ventilators and so on, thanks to donations, from organisations like Gift of the Givers. Wow, I cannot explain how grateful we are to that organisation. Space we have, we can create more wards. But staff…”

She pauses and shrugs her shoulders.

Parker says it would be naïve to think a third wave will not happen. “So we are already preparing our third wave response. We would rather over-prepare like we did for the first wave than be fairly under-prepared, like we were for the second wave.”

After touching any surface, Parker sanitises her hands.

Looking around us, she adds that meal time is a risk. “I worry about mixing when there is food in a closed space. Now your mask automatically goes off, and you are talking, laughing, with lots of little droplets spreading.”

She leads us through the hospital, past a sign “vaccinations on the fifth floor”. She shakes her head, stressing that vaccine allocation remains controversial. She herself was vaccinated three weeks ago.

“The little bit of vaccinations we’ve done in South Africa is not going to make a difference to the third wave,” she says. “But it’s our only hope at this moment, and I think it’s the safer option as opposed to having everyone wait for natural immunity.”

We pass the hospital’s pharmaceutical dispensary, which is packed with people waiting in chairs spaced one seat from another. Inside an elevator, she presses the button with her knuckle. “This is how you do it to be safer,” she says. On the eleventh floor, the hospital’s COVID response team is gathered for their weekly meeting.