For a second successive tender, the Department of Health has managed to negotiate much lower prices for the antiretrovirals used in the public health system.

It’s hard to envy Anban Pillay’s position. As deputy director-general for health regulation and compliance in the National Department of Health (DoH), Pillay is responsible for overseeing key pharmaceutical tenders, including the country’s multi-billion-rand tender for antiretrovirals (ARVs). As such, his 9-to-5 involves negotiating with pharmaceutical companies; conducting thorough research on the international prices of medicines; and setting finicky but important tender specifications. What drugs patients get, and at what price, depend largely on Pillay and his team.

Under Pillay’s guidance, the DoH has established well-informed negotiations with drug companies, alongside international benchmarking. The department has also steered the tender process away from favouring local companies. Perhaps most notably, it has encouraged faster registration of drugs by the infamously slow Medicines Control Council (MCC), and has promoted cooperation with international and local organisations, including the Clinton Health Access Initiative, World Health Organization, and UNAIDS.The result? South Africa now sources ARVs at the lowest prices available anywhere in the world. Pillay says that while globally the prices of ARVs have fallen significantly in the last decade, the DoH’s use of “innovative methods” has allowed South Africa to go even lower. He likes to boast that the prices we pay are better than those achieved by the President’s Emergency Plan for AIDS Relief (PEPFAR), the Global Fund to Fight AIDS, Tuberculosis and Malaria, and by UNICEF, who collectively supply the majority of ARVs used in the rest of sub-Saharan Africa

What did we see in the new tender?

On the whole, individual ARVs purchased in the 2013-2014 tender were significantly cheaper when compared to their 2011-2012 prices (see graph below for changes in all ARV prices). The one exception was stavudine (d4T), the price of which increased only slightly. This was not unexpected given the phase-out of d4T; with smaller quantities ordered than in 2011-2012, the DoH could not benefit from so-called ‘economies of scale’. Additionally, fewer suppliers are producing d4T due to the phase-out, preventing downward pressure on prices.

The total cost of the tender increased by 42.13% for 2013-2014, while the number of pills only rose by 12.7%. However this comparison is misleading, given the inclusion in the current tender of more expensive second- and third-line medications, as well as triple-therapy fixed-dose combinations (FDCs), which include multiple ARVs in one pill.

A total of 13 companies supplied ARVs for 2013-2014, in contrast to ten suppliers for 2011-2012. This is because more companies’ products have been registered by the MCC since the previous tender, enabling them to bid for the 2013-2014 round. Pillay says that an increase in supplier numbers is important for two reasons: to ensure security of supply, and to foster competition.

Security of supply was highlighted in 2012 by the tenofovir stockouts. These originated in part when Sonke Pharmaceuticals was unable to meet rising demand for tenofovir. Sonke and Aspen Pharmacare Holdings together split the 2011-2012 tenofovir bid. According to some sources, the DoH was also to blame for the crisis, having poorly planned for increased demand and given the two companies little time to boost supply.”

Having multiple companies bid against each other can also significantly lower prices by stimulating competition. It allows the DoH to effectively pit companies against each other during negotiations. “[Having more suppliers registered] definitely had an impact on price,” comments Pillay.

South Africa buys antiretrovirals through a specific ARV tender every two years. The DoH publishes tender guidelines and indicates which medicines they wish to purchase. Companies can then bid to provide those ARVs to the public sector.
The new tender was awarded in November 2012. It covers the period from January 1, 2013 to 31 December 2014, but drugs procured through the tender are not expected to hit the clinics until April 2013, allowing suppliers enough time to meet demand. The previous tender covered the preceding two-year period.

Which companies secured the latest tender, and who won the biggest share, changed significantly in some cases. Aspen Pharmacare Holdings, South Africa’s generic powerhouse, was given only 20.63% of the tender in terms of cost. This compares to 40.64% in the 2011-2012 tender, a drop of 49.25%. Aspen provided fewer individual first-line ARVs for 2013-2014, but was awarded the largest amount of triple-therapy FDCs included, and is responsible for bringing darunavir and etravirine, two third-line ARVs, to South Africa. Aspen has a voluntary license agreement with Janssen R&D Ireland, a subsidiary of Johnson & Johnson, to produce the medicines, both of which are under patent. Just before the 2013-2014 tender was released, Johnson & Johnson announced that it would not enforce patent rights on darunavir in sub-Saharan Africa. If other companies also produce generic versions, competition should force down the price of this increasingly important ARV.

Adcock Ingram and Cipla Medpro also won healthy slices of the bidding. Adcock took home 13.96% of the tender in terms of cost, compared to 4% in the old tender—an increase of 248.87%. Cipla secured 8.97% compared to 5.13% for 2011-2012—a 75.10% increase. Sonke Pharmaceuticals was allocated only 1.49% of the total expenditure. This time around, they were not chosen to supply tenofovir.

FDCs in the tender

Triple-therapy FDCs were specified in the tender for the first time, much to the delight of activists, clinicians, and patients after years of campaigning. According to the DoH, South Africa now sources the cheapest FDCs in the world. The tablets started reaching clinics in April 2013. Pregnant women and patients newly initiated on ARVs were first to receive them. Despite an initial phased approach, Pillay says that the department’s goal is for all eligible HIV patients to receive FDCs within this year.
He notes that single-dose ARVs continued to be included in the 2013-2014 tender to avoid glitches in the transition period. This decision was taken to ensure reliability of supply, and to provide patients with other options should treatment resistance develop.

With the arrival of FDCs, South Africa is also introducing PMTCT Option B (see Equal Treatment issue 44, Nov 2012, page 19), or triple therapy throughout pregnancy, as all pregnant women will now be eligible for FDCs. Pregnant patients with a CD4 count of under 350 will continue treatment for life. Pillay says that Option B would be rolled out regardless of whether FDCs became available, but notes that their accessibility will make the programme much easier to implement and also reduce the pill burden for pregnant women.

[box] Triple-therapy fixed-dose combinations (FDCs) were specified in the tender for the first time, after years of campaigning by activists, clinicians and patients. According to the DoH, South Africa now sources the cheapest FDCs anywhere in the world. [/box] 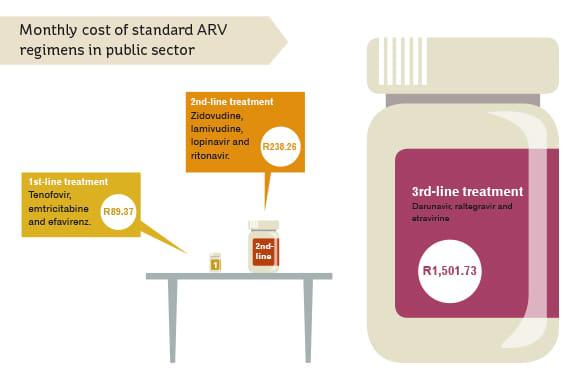 For the first time, South Africa sourced third-line ARVs for the public sector, including etravirine, atazanavir, darunavir, and raltegravir. Some of these drugs are used for both second- and third-line treatment, depending on an individual patient’s needs.

Atazanavir, produced by Bristol-Myers Squibb and imported by the little-known Dezzo Trading, was purchased by the DoH for R2.56 ($.311) per pill, compared to the $.594 per pill available on the international market.

Raltegravir was supplied to South Africa at R8.788 ($1.08) per pill by the global pharmaceutical company Merck & Co, Inc. Internationally, the firm supplies the drug for as little as $.925 per pill.

Note on data: Equal Treatment’s analysis comparing the old and new tenders differs slightly from that of the DoH. ET compared average price for each ARV (weighted by percentage), whereas the DoH considers the lowest price available. This means that the price difference calculated by ET is slightly lower than that given by the DoH.

By Mara Kardas-Nelson and Shyam Goswami

Mara Kardas-Nelson is a journalist with the Mail & Guardian’s Health Journalism Centre, where she is working on a year-long project considering access to health care, funded by the Open Society Foundation.

[caption id="attachment_1230" align="alignnone" width="567"] Photo courtesy of the WHO/Tom Pietras[/caption] Structural faults hamper justice for many victims of sexual abuse in schools SECTION27 and Lawyers Against Abuse are supporting children who have suffered sexual abuse by their teachers. Here, members of the SECTION27 legal team describe two students’ long struggle…

On 27 April 2013, the long-awaited Protection from Harassment Act 17 of 2011 came into effect. This Act sets out the processes to be followed in applying for a protection order to safeguard victims of any type of harassment. Harassment includes any activity that causes mental, psychological, physical or economic…

A treaty aimed at improving the way that medical research is funded gathered significant momentum, before it was derailed at a World Health Organization meeting last November. Despite this setback, there are some reasons to hope for progress. [caption id="attachment_1306" align="alignnone" width="567"] Photo by Samantha Reinders, courtesy of the Treatment…