The truth about youth

“Young women between the ages of 15 and 24 years are four times more likely to have HIV than males of the same age. (This risk is especially high among pregnant women between 15 and 24 years, and survivors of physical and/or intimate partner violence). On average, young females become HIV positive about five years earlier than males.”
– Introduction of NSP 2012 – 2016

[box] Teenagers growing up in South Africa face an extremely high risk of contracting HIV. Just how bad is the situation, and what are the factors that contribute to this elevated risk?[/box]

National surveys have demonstrated that HIV prevalence increases substantially during adolescence and early adulthood. Furthermore, the lifetime risk of becoming HIV-positive, for an HIV-negative teen, is estimated to be between 40% and 50%. What this means is that by the age of 60 almost half of today’s teens will be HIV-positive.

Over the past decade, South Africa has rolled out numerous measures to prevent new HIV infections amongst teens and young adults. To determine the success of these interventions, researchers look to incidence, which is a measure of new HIV infections over a specific period of time. However, it can be difficult to measure incidence and this creates some uncertainty when tracking changes. Despite these difficulties, evidence from a number of sources has shown a fall in incidence during recent years for South African adolescents and adults.

This decline is encouraging. But overall, incidence rates remain unacceptably high; today’s teens face a 50% risk of contracting HIV during their lifetimes. Researchers continue to assess the main risk factors for teens, as well as the success of prevention programmes to date. The sexual behaviour of South African youths continues to be scrutinised, with the aim of reducing their risk of HIV infection.

Over the past decade, South African teens have been exposed to communication prevention programmes telling them to change their sexual behaviour. Now there is evidence that one of these programmes – the promotion of condoms – has had a significant impact in terms of reducing new infections.

Released in 2012, the 3rd South African National HIV Communication S urvey showed a marked increase in self-reported condom use by South African adolescents and adults. The number of people who reported using a condom at first sex increased from 18% in 1992 to 66% in 2002. Also, people reported high rates of condom use at their most recent sexual encounter – 76% with a casual partner and 65% with a regular partner.

The survey findings suggest that the increase in condom use was largely due to greater exposure to prevention messaging. People who reported exposure to multiple communication programmes promoting condoms also reported higher condom use.

In a 2012 paper, Johnson and colleagues caution that self-reported rates of condom use are higher than real rates of condom use. Despite this, the authors agree that condom use has gone up. They also note that it has been the most significant factor in reducing HIV incidence so far.

However, while prevention communication has boosted condom use, a greater challenge is to change certain types of risky sexual behaviours. Recently, researchers have debated whether, and if so which, specific types of sexual behaviour are responsible for the high HIV incidence. 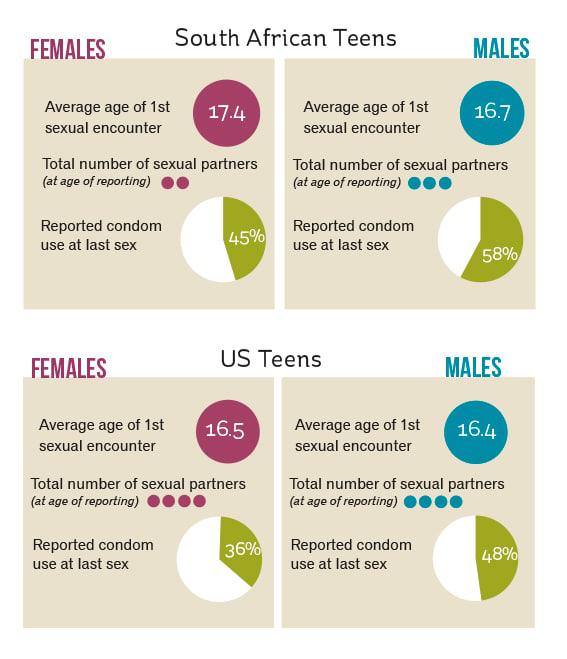 How risky is the sexual behaviour of SA youth?

The sexual behaviour of South African youth is consistently highlighted as the driving cause of high incidence rates. Although, compared to their peers in other parts of the world, the choices of young South Africans often appear quite tame.

In 2011, Pettifor and colleagues published a study comparing the sexual behaviour of youth in South Africa with that of youth in the US. The study compared representative national surveys of the sexual habits of 18- to 24-year-olds in both countries. The HIV prevalence for 18- to 24-year-olds in South Africa and the US is 10.2% and <1% respectively.

The authors suggest that South Africa’s high transmission rates might have more to do with the viral loads of people with HIV, circumcision status and STIs. They also point to the country’s overall HIV prevalence as an important contributor to the high HIV risk facing South African youth. Because of the high national prevalence, South African teens face a far greater risk of exposure to HIV infection than American teens, even though they engage in less risky sexual behaviour.

While the authors question whether sexual behaviour is the greatest risk factor in the spread of HIV, they do note a worrying trend of age differences amongst sexual partners. South African women reported on average having sexual partners four years older than themselves (compared with 2.6 years older in the US). Age mixing was also recently underlined by Health Minister Aaron Motsoaledi as a key driver of new HIV infections in schoolgirls.

Another study looking at sexual behaviour was published in 2008. This research compared the sexual behaviour of South African youth (ages 15-24) with youth in Uganda – a country which has been praised for its success in reducing HIV incidence. The study compared age of sexual debut, abstinence over a 12-month period, number of sexual partners and condom use.

While evidence shows that South Africans do not engage in more risky sexual behaviour overall than youth in the US and Uganda, specific behaviours may increase their risk of contracting HIV. One trend that has received a lot of attention is ‘multiple concurrent partnerships’. In response to the Pettifor study, Kenyon and colleagues urged that multiple concurrent partnerships remain a key driver of the HIV epidemic in South Africa and must not be overlooked.

In an effort to better understand the link between concurrency and HIV infection in South Africa, Steffenson and colleagues carried out a cross-sectional, nationally representative, household survey looking at sexual behaviour and HIV infection in South African youth during 2003. 11,904 15- to 24-year-olds were interviewed. 25% of men and 4% of women reported having concurrent partners in the past 12 months. Worryingly, men engaging in concurrency also reported more inconsistent condom use than ‘serial monogamists’.

While females had far fewer concurrent relationships than men, a statistically significant link between HIV and concurrency was identified for females. This was not the case not for men.

These results were contradicted in a KwaZulu-Natal study that followed 7,284 women over five years. All the participants were HIV-negative at the beginning of the study. The researchers used interview data from over 2,000 men to inform the study, which looked at how men’s sexual behaviour affected women’s risk of contracting HIV. The authors found that the average number of lifetime partners was a significant predictor of HIV infection, but concurrency of these relationships was not.

A review was carried out into attitudes amongst interviewees in the national survey of concurrency. The review suggested that women engaging in concurrency were more likely to face gender inequity in their relationships. They often had difficulty negotiating condom use or refusing unwanted sex with their partners. By contrast, a smaller sample of 351 interviewees in Rustenberg, Gauteng found that women believing in gender equity were more likely to have concurrent partnerships.

Interestingly, the opposite was true for men. Those who believed in gender equity were less likely to engage in concurrent partnerships. Concurrency aside, a number of studies have shown that women in South Africa who are exposed to gender inequities and gender-based violence are at a higher risk of contracting HIV.

South African teens face a frighteningly large risk of contracting HIV in their lifetimes. Yet attributing the high rates of HIV incidence to their sexual behaviour may be unfair and incorrect. However, because of their high risk of HIV infection, teens must take greater precautions than their counterparts in other areas of the world to protect themselves from HIV infection. While sexual behaviour may not be the key driver of South Africa’s epidemic, it remains a critical part of an individual’s risk of contracting HIV. Policymakers and NGOs face substantial challenges in developing their prevention messaging because of contradictory evidence about the role of specific sexual behaviours in HIV infection.

Catherine Tomlinson is a former senior researcher with the Treatment Action Campaign (TAC). She is currently working part-time for TAC while pursuing post-graduate studies.

For a second successive tender, the Department of Health has managed to negotiate much lower prices for the antiretrovirals used in the public health system. [caption id="attachment_1301" align="alignnone" width="567"] Photo by Samantha Reinders, courtesy of Médecins Sans Frontières[/caption] It’s hard to envy Anban Pillay’s position. As deputy director-general for health…

[caption id="attachment_1198" align="alignnone" width="567"] High school students attend a DramAidE forum theatre performance at a high school in KwaZulu- Natal. Photo by Patrick Coleman, courtesy of Photoshare.[/caption] Criticism of a high court judgment decriminalising sex between children aged 12 to 16 is misplaced Adolescence is a biological fact; not one…

[caption id="attachment_1182" align="alignnone" width="567"] High school students attend a DramAidE forum theatre performance at a high school in KwaZulu- Natal. Photo by Patrick Coleman, courtesy of Photoshare.[/caption] Among the core indicators of the impact of the National Strategic Plan are the percentage of young women and men aged between 15-24…