The start of 2021 saw temporary disability grant (TDG) recipients forming long queues at various South African Social Security Agency (SASSA) offices across the country. This followed a decision by SASSA to suspend the grant at the end of December, leaving scores of recipients having to re-apply.

According to a SASSA press release over 210 000 TDG recipients were affected.

Spotlight previously reported how in 2020, TDG recipients faced massive backlogs in renewing their applications due to the closure of SASSA’s offices during the country’s level 5 and level 4 lockdown.

The grant was eventually extended until 31 December.

Impact on recipients in the Western Cape

Recipients in the Western Cape were particularly affected by this decision.

According to a press release by the Western Cape’s Department of Social Development (DSD) the province has disproportionally higher numbers of TDGs that have expired compared to other provinces.

“Presently, 51 570 clients have been affected by the backlog in the Western Cape,” the statement reads.

SASSA National attributes the long queues at its regional offices to the unavailability of the usual service points in community halls and other places closer to communities. The agency said it will work with local and provincial authorities to re-open these service points. SASSA will also work on a 12 point plan to correct the situation.

Social Development Minister Lindiwe Zulu conducted a series of inspections at several SASSA offices in the province on the 14 and 15 January.

DA MP who also serves on Parliament’s Portfolio Committee on Social Development, Alexandra Abrahams, was part of the delegation and told Spotlight during the visit to the Mitchells Plain SASSA office, about 40 applicants were queueing in the rain.

“They were frustrated, angry and desperately asking for change to SASSA’s outdated processes,” she says.

Shortage of doctors adds to the problem

Following the oversight visit, Masango in a statement appealed to the department to increase the number of doctors to conduct medical assessments needed to apply for the TDG.

“It is clear that the lack of doctors to assess disability grant applicants is one of the major reasons behind the recent inhumane queues and waiting hours outside SASSA offices across the country,” Masango said.

“The backlogs in assessing disability grant cases have been a historic issue within SASSA which has been brought on by the major shortages of doctors contracted by the agency.”

In terms of the Social Assistance Act, a temporary disability grant is given for a specific period only, whereafter it must lapse. If the recipient still cannot to work as a result of the condition, then a new application with a new medical assessment is required.

Spokesperson for the Department of Social Development Lumka Oliphant told Spotlight that SASSA has recruited additional doctors in the Western Cape to assist with assessments. “More than 500 doctors have been approached to assist and the contracting with those who express an interest will continue,” she says.

She says the medical assessments are conducted by doctors who are directly contracted to the agency, as well as doctors within public health facilities.

Another SASSA spokesperson Paseka Letsatsi, told Spotlight that 33 doctors are ready to sign contracts to help assist the 9 doctors and medical officers currently responsible for medical assessments in the Western Cape.

Civil society organisations Doctors without Borders (MSF) and Black Sash have been vocal about their concerns over the impact of grant delays on beneficiaries.

Claire Waterhouse, Regional Advocacy Manager at the Gauteng Branch of MSF, tells Spotlight that some of MSF’s Drug Resistant Tuberculosis (DR-TB) patients in Khayelitsha reported not receiving their grants early in January. This prompted MSF to write a letter to SASSA highlighting the issue. Waterhouse says they have received a response and are working further with SAASA on the issue.

“We don’t downplay the work that SASSA has already done,” she says. “But we are where we are now… We’ve got patients who are not getting their grants. And for us, particularly in the time of a pandemic, but (also) in general, that’s not acceptable.”

Waterhouse says the suspension will impact DR-TB patients who rely on the grant while on treatment.

“DR-TB requires very consistent treatment… For them (SASSA) to not be clear the (TDG) was ending is a real issue, because treatment interruption for DR-TB patients is really serious. It’s catastrophic in a lot of cases,” she says.

“If patients can’t access food or are worried about money and supporting their families, [it] really can impact treatment,” she says.

Waterhouse says so far many patients only received appointment slots to re-apply in March, which will leave them with a three-month gap in grant payments.

According to SASSA’s press release, the aim is to have the re-application process completed by 31 March.

Black Sash National Director, Lynette Maart is similarly concerned about the turnaround time for applications and the effect this will have on recipients, especially DR-TB patients.

“It is also not advisable to have patients who have drug resistant tuberculosis waiting in queues since they are at high risk to contract COVID-19. In most instances, beneficiaries need the disability grant to access food to take their medication,” she says.

One recipient bemoaned how stressful the whole process is. *Maratha Abrams (48) who also spoke to Spotlight last year when SASSA suspended the temporary disability grant, says she has no choice but to go back to re-apply.

Abrams says she is due to re-apply in April, but is worried about the government suspending the grant and what it will mean for her and her family.

“I plead with government not to stop the temporary disability grant because I also need to provide for my family,” she says.

Waterhouse says that while the organisation is not downplaying SASSA’s efforts, the situation demands swift action and grants should be reinstated.

Black Sash wants the grant to be reinstated until the end of March. “This will give SASSA a window of opportunity to fix its system and improve capacity,” says Maart. “It will immediately ease congestion outside SASSA offices minimising the risk of exposure to COVID-19 for those queueing outside SASSA offices.”

According to Waterhouse, MSF wants to see a more streamlined application process, with better communication so that recipients aren’t required to make multiple trips to SASSA offices. Waterhouse says based on reports from some of their DR-TB patients, there seems to have been a lack of communication from SASSA to recipients about what was happening.

“It seems like they went as normal to get their grants and were told those grants had lapsed and that there was a long process to deal with that,” she says. “Multiple visits when you are very ill and you are scared about a pandemic is just a really awful thing to go through, and an unnecessary stress on people’s lives,” she says.

In response to calls to reinstate the TDG grant, the DSD is adamant that there is not enough money to do so.

According to Oliphant, extending the grants from February to December last year, had cost R 1.8 billion. Extending the grant for the next three months until 31 March would have cost an additional R 1.2 billion.

The cost of extending the grants is not the only reason for the suspension, she adds.

In January, the DSD and SASSA briefed MPs in Parliament on the plan for dealing with the situation. In the briefing, SASSA told MPs just over 16 000 temporary disability grants would be re-instated for recipients who meet certain requirements.

Oliphant outlines that recipients must be either 59 years old, receiving a TDG together with a grant-in-aid or normally have their grant collected by a procurator or administrator Alternatively, those who do not meet the requirements can apply for interim Social Relief of Distress (SRD) of R500 per month for a maximum of two months.

This will be limited to about 150 000 clients who meet the requirements.

According to Oliphant, this will only be provided to clients while they await their assessments. She did not provide more clarity on the requirements except that it only applies to clients who were receiving a TDG.

The agency’s total budget for the 2020/21 financial year is about R220.6 billion, and their projected expenditure for all grants is just over R220.1 billion.

According to SASSA’s estimations, this leaves about R 411 million available in funding. The cost of extending the TDG for all current recipients would far exceed this amount.

After the briefing, organisations MSF and Black Sash echoed some opposition MPs’ concerns over the lack of urgency.

Waterhouse notes that there is some level of accountability and that plans are being made but says their patients should never have been in this position to begin with.

“We have patients who don’t have food right now. For us, the accountability needs to extend to grants in people’s hands, immediately,” Waterhouse says.

Maart welcomes the extension granted for some lapsed grants, but says it is not enough “to provide sufficient remedy for the situation”.

In its observations on South Africa, the UN Committee on the Rights of Persons with Disabilities (UNCRPD) expressed grave concern regarding the rights of people with psychosocial disabilities. Professor Lesley Robertson looks at our medical model of disability and mental health legislation and unpacks the change needed at the societal and health system levels. 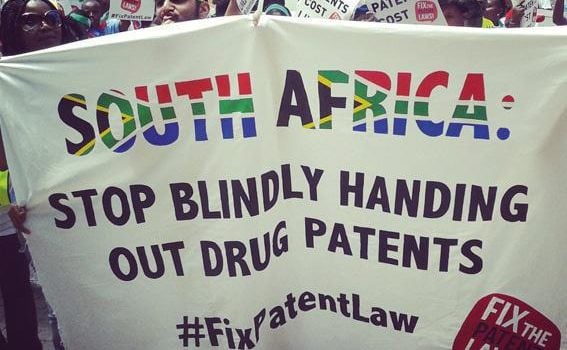 South Africa moved to level three of its COVID-19 lockdown this week meaning, significantly relaxed lockdown regulations. In many townships in Port Elizabeth in the Eastern Cape, residents have mixed views on life under lockdown. Luvuyo Mehlwana visited some townships and spoke to residents.

The Group of 23 women have come out in support of their fellow activist Vuyiseka Dubula, who recently received a threatening letter from UNAIDS Director Erasmus Morah. He demanded she retract a range of statements.