Home Blog Latest How does the roles of MECs differ from those of heads of departments?
Road to nowhere: The long, straight road leaving Prieska.

How does the roles of MECs differ from those of heads of departments?

Broadly speaking, the MEC has executive authority (political power) and the provincial HoD plays an administrative role. Unfortunately, through ignorance, over-reach, or in some cases in the service of corruption, these roles often get tangled up.

How are MECs and HoDs appointed?

MEC appointments are often described as political appointees. This is because the appointment is solely at the discretion of the Premier of the province and there is no legal obligation for the appointment to be based on merit or experience. So, for example, new KwaZulu-Natal Premier Sihle Zikalala was fully within his rights to appoint Nomagugu Simelane-Zulu as MEC for health, even though she lacks what many would consider the qualifications and experience required for the position.

Premiers typically appoint MECs from their own political parties and who are willing to associate with the political direction and agenda of the government.

By contrast, the appointment of HoDs must be based on merit as the appointee is required to have educational qualifications to justify their appointment to a specific provincial department. The vacancy of an HoD position must be advertised widely and the recruitment process must be transparent.  The same is not required when appointing an MEC.

Once appointed, HoDs are protected by stringent labour laws and public service regulations that shield from arbitrary dismissal. The same cannot be said for MECs who may be removed at the discretion of the Premier.

The general powers and responsibilities for MECs, regardless of the department for which they are responsible, are set out in section 125(2) of the Constitution. It states that MECs exercise their executive authority through a wide range of responsibilities that include implementing national and provincial laws; developing and implementing provincial policy, and co-ordinating the functions of provincial administration and its departments. Put simply, the role of the MEC is to the policy objectives and ensure that those objectives are implemented.

During the Life Esidimeni Arbitration, the then Gauteng MEC for health, Qedani Mahlangu, sought to distance herself from the tragedy by stating that she was not responsible for the implementation of the Gauteng Mental Health Marathon Project, a project that was supposedly carried out in pursuance of the National Mental Health Policy Framework and Strategic Plan 2013-2020 (NMHPFS). This defence was rejected by the Arbitrator, as he found that it was in fact her job to ensure the implementation of plans in the delivery of mental health services in Gauteng in line with the NMHPFS. The implementation obligation on the MEC does not mean she must herself take every step to implement; it means she must ensure that all steps are taken.

MECs are responsible for the four I’s of authority: identifying; initiating, integrating and interpreting.[1]

Specific responsibilities for MECs for health are set out in section 25 of the National Health Act. It provides that the MEC for health must ensure the implementation of national health policy and norms and standards in his or her province. MECs are also obligated to perform any other functions assigned to them in terms of the Constitution or any other Act of Parliament e.g. the Public Finance Management Act (PFMA).  An example of an Act that assigns specific functions to MECs for health is the Choice on Termination of Pregnancy Act which states that the MEC must approve facilities that offer termination of pregnancy services.

Whilst the task of the MEC for health is to ensure that the right policies are implemented to achieve the objectives of the National Health Act, the implementation itself is carried out by the public service – in this context headed by the HoD.

The general roles and functions of HoDs are not set out in the Constitution, but rather in the specific Acts relevant to the function allocated to them.

According to the PFMA, as the accounting officer of a department, the HoD implements a department’s policies and delivers the outputs defined in the department’s budget.  They are responsible for the effective, efficient, economical and transparent use of the department’s resources – which would include the hiring and dismissal of staff – to produce policy output. The PFMA also places the awarding of contracts strictly in the purview of the accounting officers who are supposed to ensure that the department has, and maintains, an appropriate procurement and provisioning system which is fair, equitable, transparent, competitive and cost-effective.

This does not mean that MECs do not have financial responsibilities. Firstly, the HoD must report to the MEC on the financial, commercial and socio-economic strategic performance of the department. The PFMA clearly states that it is the responsibility of the executive authority (the MEC) to ensure that departments perform their functions within the limits of the allocated budget and in compliance with the PFMA and other relevant policies. In circumstances where a directive from a MEC has financial implications, this must be done in writing. The failure to do so will result in the HoD being accountable for any resulting unauthorised expenditure.

While MECs can and should raise questions about appointments and procurement processes where there are valid concerns, these areas are the responsibility of HoDs. Maintaining the separation between the executive role of the MEC and the administrative role of the HoD is critical to avoiding political interference in procurement and human resource processes. For example, MECs should not have any say in the outcome of tender processes, nor should MECs appoint or dismiss staff employed by the department, as appears to have happened when Limpopo MEC for health Dr Phophi Ramathuba reportedly removed the entire management team at Tshilidzini Hospital.

So what should we expect from the MECs for health and HoDs?

Although they have differing roles, MECs and HoDs are all bound by the Constitution. In section 195 of the Constitution, the values and principles within which public administration must take place are set out. Amongst others, it demands that public officials perform their duties to a high standard of professional ethics, responding to people’s needs and encouraging the public to participate in policy making.  It also requires that public administration be accountable[2] and transparent by providing the public with timely, accessible and accurate information. Accountability, transparency and responsiveness means that when the media or general citizenry seeks answers from public officials, public officials must take all reasonable steps to respond, and not simply ignore.

Prior to the 2019 national and provincial elections Spotlight sent questions to all nine MECs for health. Despite various attempts at follow up, only two of the nine answered the questions. This reflects a wider trend of non-responsive MECs and provincial departments of health. In a number of instances, Spotlight has been refused basic information on tenders and government spending and asked to request information by lodging an application in terms of the Protection of Access to Information Act (a slow and time-consuming process). This is unacceptable – no matter if you are an MEC or an HoD.

Finally, in the interest of good governance, all MECs and HoDs should serve the public within the bounds of the their legally-defined roles. This is critically important for both the smooth and correct functioning of the state and for the fight against corruption. MECs or HoDs who act outside of their roles or who underperform in other ways should be held accountable. After all, in the exercise of their powers and the discharge of their duties, MECs are individually and collectively accountable to the legislature, and by extension to the public.

[2] In the exercise of their powers and the discharge of their duties, MECs are individually and collectively accountable to the legislature. Section 133 of the Constitution.

Roughly two in five people newly ill with TB worldwide are never diagnosed. In South Africa, this amounts to about 120 000 to 160 000 people per year. A large new study called XACT III is testing ways in which more people can be diagnosed and started on TB treatment more quickly. Tiyese Jeranji reports.

The head of the South African arm of a key COVID-19 vaccine clinical trial is “full of pride” for the teams’ part in the research which has shown the vaccine candidate to be more than 90% effective according to early findings released this week. It however remains unclear whether the vaccine will be available in South Africa once registered. Adele Baleta reports.

By Ufrieda Ho – Two specific issues emerged as priorities for Gauteng from the Provincial Health Assembly this year: migration and mental health. 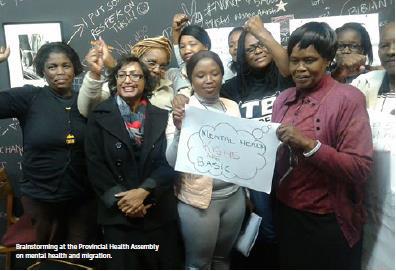