#Vote4Health: New hope as Lusikisiki finally gets a new clinic 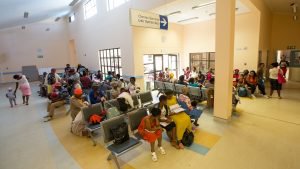 In Lusikisiki, in the OR Tambo District of the Eastern Cape, the so-called Village Clinic had become emblematic of a faltering health system, in a rural area fraught with chronic illness and early death due to rapidly-spreading HIV and tuberculosis. Now, following years of activism and litigation that started in 2013, a new state-of-the-art incarnation of the clinic is finally poised for official opening on April 3.

Lusikisiki, formerly the capital of Eastern Pondoland, consists of a bustling commercial centre and roughly 40 villages scattered across a 60-kilometre radius flanking the sea. The area is a significant health strategy node in that from 2002 to 2005 it served as South Africa’s first rural antiretroviral rollout base, a programme spearheaded by international nongovernmental organisation Médecins Sans Frontières (MSF), (Doctors Without Borders). It was also decreed one of South Africa’s 10 National Health Insurance pilot sites in 2012. Eastern Cape department of health spokesperson Lwandile Sicwetsha did not respond to calls or messages from Spotlight requesting information on the new Village Clinic.

Failed attempts to engage with Eastern Cape health officials is perhaps not surprising.

In May 2013 the Treatment Action Campaign (TAC) filed a lawsuit against the Eastern Cape’s health department for failing to address dire conditions at Village Clinic, then housed in two tents and a rickety park home on a muddy plot without electricity, and with just one pit latrine on a steep embankment. At the time, witnesses noted how one of the clinic’s nurses broke an arm climbing up to the toilet.

In their 2013 court papers, the TAC listed Motsoaledi as a respondent. In his response Motsoaledi agreed that circumstances at the clinic were unacceptable –sidelining the provincial health department to arrange for the erection of a temporary structure to house the clinic, while tabling plans for an entirely new building. This is the facility finally set to launch next month, after more than five years of setbacks and delays.

In February, Spotlight visited Lusikisiki’s new Village Clinic, which sprawls impressively across a quiet block set back from the town’s teeming main road. The premises already opened its doors to patients in September last year. 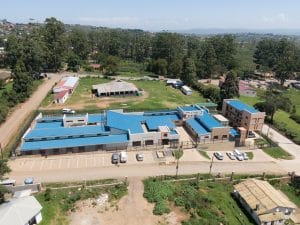 The clinic sits behind ample parking and a high fence, with a gentle sloping ramp for wheelchair access. At its entrance, two security guards smile in greeting, pointing towards reception.

Inside, along the first corridor, doors are marked: dental surgery, oral hygienist room, emergency room, and manager’s office, along with three consulting rooms and a counselling room. The consulting rooms are fitted with brand new examination beds, with step access, wall-mounted examining lights, and electronic blood monitoring equipment; on desks there are boxes of hypodermic needles and Vitamin B injections.

In the corridor, two teenage boys in school uniform are waiting to pick up medicine during their school break. ‘We came here for an injection for my friend, you see he has the scabies disease,’ says one boy. ‘We waited 30 minutes to get the injection. This is not bad; at the old clinic it would have taken much longer, we would have had to sit in the sun all day. It got very hot waiting at that clinic, it was very hectic actually.’ His friend attests: ’Yes this is way better.’ Ambling away, he adds: ’So we’re going to the pharmacy now, to get the medication the nurse wrote down.’ 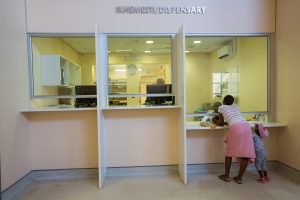 Indeed, inside the complex is a dispensary, where a pharmacist in a white coat serves patients one by one from behind a glass pane.

In front of the dispensary is a waiting area, with 82 people – many with babies huddled to their chests – seated in rows on metal benches. To the side in a playroom, parents are watching hip-high toddlers waddling over artificial grass; a man is tilting yoghurt into an infant’s mouth. 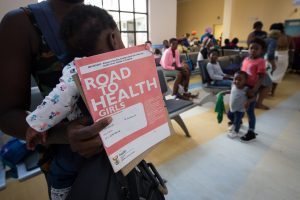 Sitting in the waiting area is 25-year-old Nkani Sinelizwi from New Rest location, about a kilometre from the clinic. He pulls up his trouser leg to show a bandaged ankle; he was bitten by a dog the previous Friday, and is waiting for his second tetanus shot. ‘For the first injection I waited 20 minutes, this is a big improvement on the service we had before,’ says Sinelizwi. He is a psychology student interested in mental disorders. ‘People here struggle to differentiate between mental disorders and witchcraft,’ he says. ‘I want to help teach them to differentiate.’

Overhead, the ceiling is high and the air remarkably cool, given the stifling heat outside.

There is a low hum of voices, punctuated by a baby’s shrieks from the maternity section on the building’s far side.

In a consulting room adjacent to the maternity section, nursing assistant Princess Dlakavu is seeing patients. A resident of the Dubana AA location – near the Lusikisiki prison – she is 58 years old and has worked at the Village Clinic for about twenty years, she says.

Dlakavu’s eyes are bright as she points at the equipment around her.

‘Yes at the previous clinic there were challenges. There was no space, but we tried. There were high statistics, HIV, a lot of patients. But now we have many, many consulting rooms.’ She pauses to count: ‘Fourteen consulting rooms in total, yes that’s a lot. Then there is the dental facility, the emergency room, the maternity ward, and the section for chronic illnesses; that’s for our diabetic, hypertensive, and psychological patients, and people who need ARVs, people with TB.’

Dlakavu worked at the Village Clinic when MSF doctor Hermann Reuter brought ARV medication there – and to 11 other clinics around Lusikisiki – in partnership with the Eastern Cape Department of Health. In his book Three Letter Plague, Jonny Steinberg notes that when MSF arrived in Lusikisiki in 2002, one in three pregnant women tested positive for HIV. Reuter’s driving passion was to destigmatise HIV testing and treatment.

She says that after MSF left in 2005, clinics in the area continued with the programme.

Today, talk on the street is that ARVs are readily available.

Outside the Village Clinic, a 29-year-old woman looks relaxed while speaking to Spotlight. She says many of her generation have realised that ARVs bring about quality of life.

‘Now the most people are taking ARVs,’ she says. ’In the past, if I was going to pick up ARVs, and I saw someone I knew, I would hide myself. Because I would not want them to know my status, that is if I’m HIV positive. But now, most of the people are just going to get their medicine.’

She adds that waiting time to pick up treatment is minimal: ‘When you pick up ARVs there are no queues. You just take out your card – a medical card that shows what you are having – and you give it to the person that’s helping you, and you get your treatment and you go home. Unless it’s your first time, then it’s going to take a little bit more time.’

At the TAC offices flanking Lusikisiki’s Magistrates Court, the TAC’s long-time provincial manager, Noloyiso Ntamenthlo, agrees that ARVs are today widely accessible in the region. However, Ntamenthlo voices concern over the unavailability of other medicines required to treat HIV-related symptoms: ’The challenge is the unavailability of other drugs. I mean, say for example I’m living with HIV and I have shingles; if I’m living with HIV and I have diarrhoea. So in our clinics we are struggling to access these essential medicines; especially in the OR Tambo region, here in Lusikisiki. I was presenting this problem to the MEC [Eastern Cape health MEC Helen Sauls-August] saying that we are struggling. The MEC then said they are doing renovations at the depot in Mthatha, and that everything’s upside down. My point is, what was their plan? You can’t just renovate without considering that people are going to suffer without this medicine, it’s very difficult.’

In addition, Ntamenthlo notes that other clinics in the area are in desperate need of upgrades, notably the one in Flagstaff, 42 kilometres from Lusikisiki’s town centre along the winding R61. ‘The Flagstaff Clinic is incomplete,’ she says. ‘The clinic is operating from the old post office container. At the clinic, when the sisters want a urine sample, the patients and the pregnant women have to go outside to the grass to pee, and then return with the urine. So there are those difficulties.’

Another challenge is the attitudes of clinic staff. Sometimes they treat patients known to them ahead of others who have waited longer; or they insult patients. ‘There are the insults from nurses and staff supposed to help you: ‘You are smelly, go wash your body.’ Maybe that person is sick or staying at home alone and there is no one to assist with cleaning,’ says Ntamenthlo.

Regarding the new Village Clinic, Ntamenthlo is raising questions over the medical staff required to operate the facility.

‘It’s a beautiful building, the TAC and SECTION27 fought hard for this clinic, I am very happy about it,’ she says. ‘But my problem for that clinic is the issue of human resources. I’m scared the Department of Health does not have a human resource plan, and that is the disaster. They are saying it is the biggest clinic in the province, so where is the staff?’ 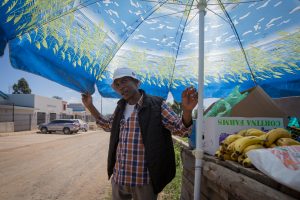 Meanwhile, at his refreshment table next to the new Village Clinic, Lwazi Deyi, of Palmerton village, 10 kilometres away, reports a drop in business. ’I had a shop at the old clinic on the other side as well,’ says Deyi. ’Business was better that side, because people stood outside in the sun and rain waiting for hours, so they would buy my products while waiting. But yes, I decided to follow the new clinic to this side.’

Underneath a blue umbrella his wares are on display: apples, bananas, vetkoek, and chilli sausages.

‘I am selling healthy things, as you can see,’ he says. ‘I look after the patients and want them to get well soon. These are my people, I don’t want them to be sick or to die. I am very happy about the new building.’

All in all, in the days leading up to its official opening, the new Village Clinic is shrouded in an atmosphere of optimism. On the faces of most of those walking its corridors and precincts, looks of cautious wonder; a glow of pride and dignity.

Note: Huisman is a writer and freelance journalist. She was commissioned by Spotlight to write this article. While Spotlight is published by SECTION27 and the Treatment Action Campaign, its editors have full editorial independence — independence that the editors guard jealously. Spotlight is a member of the South African Press Council.

Who will be South Africa’s next Minister of Health and what will be the impact of May’s national and provincial elections on South Africa’s ongoing health crisis?

In Luskikisiki in the Eastern Cape girls as young as 11 years old are falling pregnant and becoming HIV-infected, prompting renewed calls by the Treatment Action Campaign (TAC) that government condoms are distributed at primary schools. Biénne Huisman attended a community meeting in Lusikisiki.

In the run-up to South Africa’s general elections in May 2019 Spotlight will be publishing a series of articles under the banner #Vote4Health.

One Response to “#Vote4Health: New hope as Lusikisiki finally gets a new clinic”