Home Blog Latest Two steps forward, three steps back – a tale of the Eastern Cape clinics
The collapsing shell of what used to be Hamburg Clinic

Two steps forward, three steps back – a tale of the Eastern Cape clinics

Keiskamma River. The 30-year-old structure fell down in 2012, as a result of strong winds. In 2017, after five long years, the Eastern Cape Health Department – in partnership with the Coega Development Corporation (CDC) – began the construction of a new clinic. According to the department’s spokesperson, the project is due to be completed in a year’s time.

On the day we visited, the site was abandoned. Our source tells us that construction – which began in July 2017 – has been slow and erratic. When it rains, workers do not come to work. This does not bode well. It is unlikely that the clinic will be completed in the timeframes promised by the department. In the meantime, Hamburg Clinic is housed in the Keiskamma Trust building.

the healthcare users of Philani Clinic, near Ntshilini village. The clinic was overhauled and rebuilt following the publishing of the Death and Dying report in 2013, when Health Minister Aaron Motsoaledi was alerted to among others the dire circumstances under which nurses operated in the clinic.

Asbestos heaters have been removed. New sluice facilities have been built. The clinic has a pharmacy storage unit, replete with chronic medication. But all is not well.

The nurses are forced to use old equipment, which was not replaced during the refurbishment. The newly built staff quarters have no furniture. The clinic, which serves communities from Ntshilini all the way to Canzibe, is staffed by two professional nurses and a couple of community health workers, who are not employed by the department. There is no doctor rostered to visit the clinic.

In a recent case in which a two-year-old was burnt by hot water, the sister on duty did what she could to clean the wound, but had to refer the child to Canzibe Hospital, some 40 kilometres away. This is a daunting journey on any day, because the roads are so poor; and as there is no ambulance in the area, the child’s parents were forced to hire a car, at exorbitant cost.

The enterprising Sister Sylvia, who has worked at the clinic for over 11 years, has placed a sign where the ambulance ought to park – if and when it ever arrives.

the construction proposed for the Village Clinic in Lusikisiki in the Eastern Cape, the clinic is still not open.

This clinic has a long and complicated history. Since 2005, it had been housed in a building formerly occupied by AngloGold Ashanti; which was ideal, as it was located in the centre of town, and had private consultation rooms, a waiting area, bathrooms and a pharmacy.

Bizarrely, in December 2012 the Eastern Cape Health Department (ECDoH) closed the clinic down, and relocated it to a site just outside of town. From then on, two porous tents and a mobile home would serve as the clinic for the people of Lusikisiki.

The Treatment Action Campaign (TAC) and ECHCAC embarked on a series of protests, and enlisted the help of SECTION27 to begin a process of litigation. The TAC filed a lawsuit against the ECDoH on 29 May 2013, in which it named the Minister of Health as respondent. The Minister, on seeing pictures of the tents that comprised the clinic, tabled a plan to put up a temporary structure by July 2013, and to build a large, permanent clinic in the following eight to 12 months.

Since the temporary structure was erected in 2013, the people of Lusikisiki have been without a building for their clinic. They wait in the rain and the cold for their medicines, which are housed in a trailer with no refrigeration; and there are no private consultation rooms. Contractor issues have resulted in endless delays in the construction of the new clinic.

In August 2017, the contractor declared itself ready to hand the clinic over;  however, the Department of Health deemed it incomplete according to its standards. At the time of writing, it was unclear when the clinic would finally be ready to open.

On the Eastern Cape’s Wild Coast community members and organisations are working together to prepare and protect against COVID-19. Spotlight spoke with people from four different villages to learn more.

Baby Mivuyo Damsesi clutches a toy ambulance in her grubby 2-year-old hands. Her mother, Noluthando Damsesi (28) says that it was given to her at the crèche she attends in Silatsha Village, 50 km from East London. This is likely the only ambulance the little girl has seen in her… 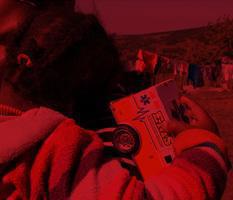