Interactive table: See how SA’s provinces compare on the 90-90-90 targets

New estimates from the Thembisa model (a leading mathematical model of HIV in South Africa) suggest that while KwaZulu-Natal is doing well in its HIV response, the North West province is struggling.

One widely endorsed set of measures to track a country or province’s HIV response is UNAIDS’s so-called 90-90-90 targets – a set of targets also adopted in South Africa’s National Strategic Plan for HIV, TB and STIs 2017 – 2022.

How are SA’s provinces doing?

You can click the column headings to sort by the related indicator.

In addition to the 90-90-90 targets we added two extra columns to the right:

Note: The numbers quoted in the table are the 2019 mean point estimates from the Thembisa model version 4.3 (confidence intervals are provided in the published outputs on the Thembisa website). Thembisa also includes estimates for 2020, but these are substantially more uncertain than the 2019 estimates. For viral load suppression we used the 1 000 threshold rather than 400 (Thembisa provides both).

The new national clinical guidelines for the implementation of the Choice on Termination of Pregnancy Act serve as an opportunity to strengthen services in providing much-needed clarity and guidance to health workers. Marion Stevens and Nozizwe Conco unpack these guidelines on International Safe Abortion Day.

The North West has passed the one million mark for COVID-19 jabs administered. Nthusang Lefafa unpacks the vaccination numbers, reasons for the province having some of the lowest vaccination numbers in the country, and how it is working to catch up.

Spotlight has developed two new advocacy guides for members of provincial or district AIDS councils. One focuses on TB prevention and the other on retention in care. 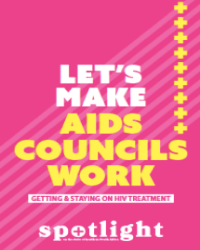 As Charlotte Maxeke Hospital missed its date to reopen this month after a fire in April, there are concerns that the true cost of the fire is still to be counted and that the fire is just another indication of a health department and fire service in crisis. Ufrieda Ho reports

The COVID-19 pandemic and measures to prevent its spread have impacted children in some predictable and some less predictable ways. Kathryn Cleary spoke to some experts and some kids to get a deeper understanding.