The UNAIDS-endorsed 90-90-90 targets have become key indicators against which to measure our progress in the HIV response. These targets have also been included in South Africa’s National Strategic Plan for HIV, TB and STIs 2017 – 2022. 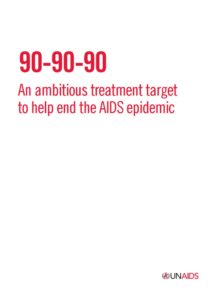 In short, the three targets are as follows:

This week findings from the Human Sciences Research Council’s 5th South African National HIV Prevalence, Incidence, Behaviour and Communication Survey, 2017 provided some new estimates as to South Africa’s progress against these targets. In their presentation the HSRC focused on estimates for people aged 15 to 64 – which obviously excludes children and older people. (At the time this article was published the HSRC had not yet posted the findings on their website.)

Things look much less rosy when it comes to the second 90. The study estimates that only around 71% of people aged 15-64 with diagnosed HIV infection are receiving sustained antiretroviral therapy. In other words, many people who know their status have not started treatment. This may in part be because until 2016, antiretroviral therapy was not indicated for all people living with HIV in South Africa, but only for people with CD4 counts below 500 cells/mm3. On the other hand, it might also flag a problem in our healthcare system whereby, for whatever reason, some people do not return to the clinic after a positive HIV test.

This finding resonates worryingly with findings presented two years ago from an important trial called TasP. In TasP an ambitious test-and-treat strategy was expected to reduce the rate of new infections in communities by getting more people on to treatment and ensuring that the virus becomes suppressed in their bodies. Results from TasP was disappointing, mainly because many people who tested positive never started treatment or didn’t start treatment soon enough.

As far as the three 90s goes, the survey is most surprising and arguably most encouraging in relation to the third 90. It estimated that 86% of people aged 15-64 receiving antiretroviral therapy have viral suppression, that is to say, the virus is so successfully suppressed in their bodies that it cannot be detected with standard tests. If this estimate is accurate, it is very good news not only for the health of those people with viral suppression, but also for the prevention of new HIV infections. This is because people with undetectable viral loads do not transmit the virus to their sexual partners.

It is important to note though that the above figure refers only to 86% of people aged 15-64 who are on antiretroviral treatment. Of the total number of people of all ages living with HIV in South Africa (the estimate is around 7.9 million or 14% of the population) the survey estimates that only 62.3% are virally suppressed.

Over the years, HIV and the ensuing global epidemic has resulted in millions of deaths. With the advent of antiretroviral therapy, and the advocacy efforts of civil society, HIV-related mortality has significantly decreased, as has mother-to-child transmission.

When South Africa’s rollout of the AstraZeneca vaccine was put on hold in early February, a scramble ensued to ensure healthcare workers could be protected. Chris Bateman spoke to Professor Glenda Gray about the behind-the-scenes negotiations that helped secure 500 000 doses of the Johnson & Johnson vaccine – almost all of which have now been used in the Sisonke study.

The controversial suspension of one of the North West province’s senior clinicians two weeks ago, has been lifted with Professor Ebrahim Variava returning to his post as head of internal medicine at the Klerksdorp Tshepong Hospital in North West.