Home Blog Provinces Kwazulu-Natal Fewer children are dying of severe malnutrition, but ignorance continues to kill babies
Nompumelelo Phongolo (37) sits with her daughter Owami during an interview with Spotlight

Fewer children are dying of severe malnutrition, but ignorance continues to kill babies

South Africa has made progress over the past 10 years in reducing SAM levels in young children, according to the 2014 Triennial Report of the Committee on Morbidity and Mortality (CoMMiC) in children under five.

From 2009 to 2013 all provinces, except the Free State, were able to reduce the incidence of SAM in the general grouping of identified malnutrition cases. Indeed, KwaZulu-Natal reduced its prevalence from 8.6 percent to 3.5 percent of recorded cases.

However, achieving the national SAM target of just 1 percent of all malnutrition cases remains elusive despite government and international interventions.

The World Health Organisation (WHO) defines SAM by a very low weight for height (below -3z scores of the median WHO growth standards), by visible severe wasting, or by the presence of nutritional oedema.

According to the latest CoMMiC report, 28.7 percent of deaths in the under-five age category in KZN had underlying severe malnutrition in 2013. The province also had the third highest in-hospital mortality rate for SAM in children below five years of age, at 16.4 percent.

Health professionals working at Dundee Provincial Hospital in KZN’s Endumeni Municipality cited poverty, a lack of education, laziness, and the use of quack or fake remedies as the reasons most SAM-afflicted children had been admitted to their facility.

Hospital records show that in the 15 months to the end of April 2016, the medical facility’s e-ward, where all SAM cases are treated, admitted 59 young children struggling with the condition, of which five died.

It is unclear how many children with mild-to-moderate levels of SAM attended Dundee Hospital over the same period, as these cases are treated as outpatients, and the information was not accessible to the Spotlight.

Lungile Tshabalala, a dietician at Dundee Provincial Hospital, explained that in many SAM cases she sees, the patients’ mothers do not understand how to nourish their children properly. They try to feed babies with adult food, she said, as they cannot afford baby formula.

“This shouldn’t be happening,” she said. “There should be people monitoring these kids all the time, rather than just when they are in hospital.”

Tshabalala said that nutrition advisors do not always do a good job of advising patients properly because they are under the directive of supervisors who try to impose their own ideas, which are not always best practice.

When speaking to nurses and mothers in Dundee Provincial Hospital’s e-ward, many interviewees said the widespread use of quack remedies and herbal enemas was a contributing factor to the persistence of malnutrition in local communities.

“If a child has diarrhoea, the mother thinks the herbal treatment will help,” according to Tshabalala.

The mothers on e-ward said that people used such mixtures because they are advised to by older generation family members, or traditional healers. One enema that was said to be widely used comprises shoe polish, toothpaste and soap.

Mathias Mbatha, head of traditional health practitioners in the Dundee area, told the Spotlight that children should never be given a health enema, but that “fake” traditional healers often prescribed it for a variety of ailments, including HIV.

“The biggest problem is the pseudo-traditional healers,” stated Mbatha, “They chop up whatever they can find and just sell it to people on the streets. Sometimes people take enemas without even having them prescribed.”

It also appeared that many of the mothers who accompanied their children on e-ward were unprepared to deal with motherhood and child rearing.

Nontando Sithole (22), who took her seven-month-old daughter S’nikiwe to see a doctor because she was struggling to breathe, said she had not taken the baby to hospital since she was born because “I was too lazy”.

Mbali Sithole (19) took her 11-month-old daughter Elihle for an assessment at the hospital on April 29 last year because the little girl had diarrhoea and was vomiting. The child was immediately admitted for SAM.

“I thought she was just teething, but she became weak and started to lose weight,” said Sithole.

For Umzinyathi District where Endumeni is located, the provincial department of health’s annual report for 2014/2015 states that 282 young children were admitted to hospital with SAM for the 12-month- period. In total, 35 of these patients died.

For a province-wide view of the problem, the annual report states that 3 880 cases of SAM in children under five were admitted to hospitals in KZN for the period under review, of which 405 proved to be fatal.

In terms of diarrhoea, which in severe cases leads to malnutrition, the number of deaths in the province stands at 30 from 798 cases admitted between 2014 and 2015.

During his April 2016 budget vote speech KZN Health MEC Dr Sibongiseni Dhlomo said that in March 2015 a pilot intervention targeting all households in Zululand District, which has the highest number of malnutrition deaths for children under five in the province, was launched. This was followed by a broader roll out of the initiative across the province.

“The main outcome of the community-based profiling recommended by the model was that children were identified earlier with fewer complications, and thus had better health outcomes.

“There has since been a 22% reduction in deaths related to severe acute malnutrition in the province since the last financial year,” he stated before adding that “all other districts have been encouraged to roll out implementation of the model so that the province perseveres in achieving optimum child health.”

When the KZN Department of Health was approached to contribute to this article, they failed to address any of the questions submitted to the KZN health MEC’s spokesperson, despite being given a number of weeks to respond.

So, whether its latest intervention is viewed by the department of health as a watershed moment strategically, and has the desired impact of driving down the number of SAM deaths to the 1% national target, remains unclear.

By Ufrieda Ho – All over the Free State things are buzzing with public works projects, but also with electioneering. It seems there are as many road works and infrastructure upgrades as there are election posters on walls and lampposts. 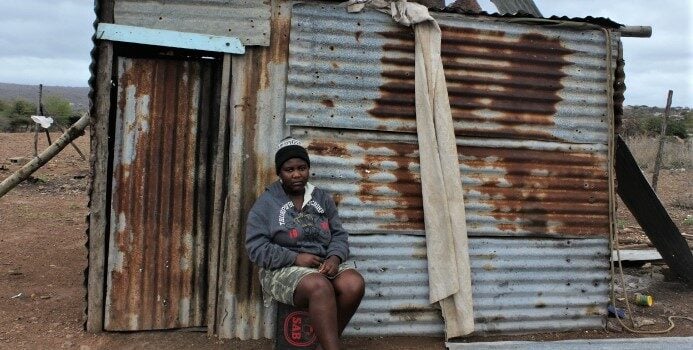 Last year KwaZulu-Natal celebrated three districts’ achievement of the UNAIDS 90-90-90 targets. But celebrations may have been premature, as new data shows that no district in KZN in fact met the targets. Spotlight visited one of the districts to investigate.

Concerns are mounting over people stopping or not starting tuberculosis and HIV treatment during South Africa’s COVID-19 lockdown. Nomfundo Xolo spoke to activists and people living with HIV and TB in Hammonds Farm in Verulam in KwaZulu-Natal about the challenges they face.