HPV: What is happening with SA’s other relatively new vaccine programme?

In February 2021, Irene Banda was diagnosed with late-stage cervical cancer. Doctors at Rahima Moosa Mother and Child Hospital in Johannesburg confirmed the diagnosis and told her she would need treatment.

But they couldn’t give her that treatment yet.

Banda says she was told to go home and wait. So she did. Without any contact from her doctors, she waited until September, when she began to experience uncontrollable bleeding.

“I was bleeding so much, I had no energy left in my body. I felt I was just waiting to die,” the 47-year-old tells Spotlight.

In August, Banda was admitted to Charlotte Maxeke Hospital where she was given a blood transfusion. “When I asked them what will happen to me now, they told me to go back home and wait,” she says.

Nine months after her initial diagnosis, Banda returned to Charlotte Maxeke Hospital to start chemotherapy and radiotherapy. She now feels she’s getting better, but still doesn’t know what will happen to her or how her cancer will progress.

Cervical cancer is the second most common cancer affecting women in South Africa and results in over 6 000 deaths each year, according to the National Cancer Registry. Among Black African women, it accounts for 30% of all cancers.

But cervical cancer is an entirely preventable disease that can be eliminated in part through vaccination. In 2020, South Africa was one of 100 countries with a national vaccination programme aimed at making primary prevention of cervical cancer a priority.

However, challenges including complexities of the campaign’s delivery, the high cost of vaccines, and the pressures of COVID-19 may limit South Africa’s potential to save lives and catch cases like Banda’s earlier.

“Vaccination is a key instrument in going forward in reducing cervical cancer to an acceptable level in the next century, but there’s still so much we need to do in terms of levelling the playing field and dealing with inefficiencies,” says Professor Lynette Denny, head of the Department of Obstetrics and Gynaecology at the University of Cape Town (UCT).

Research carried out by Denny shows that many women living with HIV are also infected with HPV, and have a two- to 22-fold increase in cervical cancer compared to HIV-negative women.

Vaccinating girls prior to their first sexual experience may prevent infection with this sexually transmitted infection (STI) and effectively control and prevent cervical cancer, according to the World Health Organization (WHO).

This potential was emphasised last month when a landmark Lancet study showed the UK’s HPV immunisation programme resulted in an 87% decrease in cervical cancer among women vaccinated at age 12 and 13.

“The Lancet study provides evidence that if you vaccinate your daughter early in life, you stand a strong chance of reducing her risk of cervical cancer without evidence of safety concerns,” says Professor Sinead Delany-Moretlwe, director of research at the University of the Witwatersrand Reproductive Health & HIV Institute (Wits RHI).

While there are differences between the UK campaign and the one in South Africa, including the number of doses, the catch-up strategy, and the fact the UK began in 2008, she says it is possible for South Africa to reach the same outcomes.

“It may take us longer to see the effects they saw, but we do expect to see those effects in about 20 years’ time as the first vaccine cohort progresses,” she says.

The Department of Health launched the South African HPV vaccination campaign in 2014. The campaign targets 9-year-old public school learners in Grade 4 and involves delivering two doses of vaccine six months apart through collaboration with the Department of Basic Education.

“Before the pandemic, we were reaching 80% of our target population and saw the programme as running relatively well,” says Dr Lesley Bamford, Acting Chief Director of Child, Youth, and School Health at the National Department of Health.

Figures from Delany-Moretlwe confirm this but show a drop off for the second vaccination. “We were getting about 80 to 85% coverage for the first dose of the vaccine but seeing a drop off for our second dose to about 60%,” she says.

However, compared to global health averages of about 67% for the first dose and 53% for the second dose this is still good news, she says.

Maintaining momentum and reaching those who make up the missing figures, however, may be hindered by the need for eligible learners to get informed consent before vaccination.

This is a barrier Delany-Moretlwe and colleagues flagged in a 2018 study when they reviewed the first-dose phase of the initial vaccination cohort. The system, where a child relays information about the vaccination programme to the parent, secures their signature on the informed consent form, and returns the form to school in time for vaccination day, “needs rethinking”, they concluded.

“Misunderstandings are highly likely and unconsented vaccinations can occur in error” because of this system, read the study. It suggested rather using an opt-out model or mHealth applications.

Acknowledging that consent is one of the factors contributing to less than full coverage, Bamford says that it hasn’t been seen as a major problem but that may be changing now.

She shares anecdotal evidence that parents may be confusing HPV vaccine information with the COVID vaccine and expressing hesitancy. “We’ve received reports that some parents are confused and think the programme is about COVID vaccination, and there’s been some unwillingness and withdrawal of consent because of that,” Bamford says.

We are now at Ekukhanyisweni Primary School where MEC Ramokgopa is joining Gauteng Health Officials who are immunising a total of 64 grade 4 learners (aged 9 years and above) for the Human Papillomavirus (HPV) #PostSoPA pic.twitter.com/7ovQ5S3fhE

Issues of cost and availability may also limit the progress of the vaccine programme. In its October 2020 Human Papillomavirus Vaccine: Supply and Demand Update report, UNICEF expressed concern about costs and a rising global demand expected to reach as much as 120 million doses per year by 2030.

“Even before COVID, the programme was grappling with a real threat to supply and increases in cost that would make it unaffordable,” says Delany-Moretlwe.

Acknowledging the department has experienced issues with availability, Bamford says there is also uncertainty about the effect COVID-19 may have on the budget for the vaccine. South Africa procures the HPV vaccine through a standard tendering process paid for with a conditional grant.

“This funding mechanism may further strain the budget, but our understanding is the provinces have bought into the campaign and will continue it even when it must be funded through the provincial budgets,” she says.

Acting CFO in the National Department of Health Hedly Nevhutalu recently told MPs in Parliament’s Portfolio Committee on Health that most provinces have underspent (about R52 million of a total budget of R220 million) on the HPV component of the HIV/TB, malaria, HPV conditional grant in 2020/21. Only the Western Cape, Northern Cape, and North West spent their HPV budget allocation in full.

“[This] underspending was due to the postponement of the Dose 2 vaccination as a result of the second wave of COVID-19 and delays of Dose 1 that overlapped to the 2021/22 financial year,” Nevhutalu said.

Despite an initial delay, the 2021 HPV vaccination campaign kicked off with dose 1 given nationally between 1 March and 30 April. While it has had to make up for disruptions such as some schools being open only 50% of the time, Bamford says they’ve been lucky not to have taken a bigger knock.

Indeed, the department had taken the decision to shift vaccinations to Grade 5 learners in 2020, making up for girls who missed out because they were not yet nine years old while in Grade 4.

“We were very lucky because the transition meant we had almost a year off where there was no cohort that needed vaccination in 2020,” says Bamford.

With the second round of vaccinations administered between 6 September and 29 October, the Gauteng Department of Health reported 70 851 first doses administered and 57 853 second doses.

Other provincial health departments did not respond to a request for vaccine statistics, and the Western Cape Department of Health said its data were still being collated. As those figures are revealed, a picture will soon materialise of how the programme stands amid its challenges.

That picture, however, should be viewed with one caveat, says Delany-Moretlwe. “These estimates of coverage may not be the total that needs to be vaccinated because they don’t account for girls in private school or girls not attending school.”

Even if the vaccination programme were able to reach all eligible girls, it wouldn’t eliminate the need for more comprehensive cancer care, says Salomé Meyer, Access to Medicine project manager at Cancer Alliance.

“One thinks if we only focus on vaccination and primary prevention, our problem will be solved, but cancer is a very complex disease,” she says. “We need comprehensive strategies with primary prevention, screening, treatment, and access to palliative care.”

According to her, screening women for cervical cancer with pap smears isn’t happening early enough or at all. “What happens is these women then present to primary healthcare clinics with late-stage disease,” she says.

Presenting with stage 3b cervical cancer, Banda says she’d never heard of the disease before or had a pap smear. The chances of living for at least five years after diagnosis with this stage cervical cancer is 32%, according to the University of Kansas Cancer Centre in the US.

But pap smears alone, as with vaccines alone, will not be enough to eliminate cervical cancer. In fact, the WHO has set out a Global Strategy for cervical cancer elimination that targets having 90% of girls vaccinated by the age of 15, with 70% of age-appropriate women screened, and 90% of women with cancer treated and managed.

One way of achieving this may be to link vaccination with other preventative support, says Denny. “This way we can screen a woman, treat her at the same visit, and offer other services such as HIV testing, contraception, and inquire about gender-based violence,” she says. “It requires more investment but creates an overall more robust screening system.”

This is the fourth National Strategic Plan (NSP) that South Africa has adopted to guide its response to HIV, Tuberculosis and sexually transmitted infections. Viewed together, the plans set out in the NSP provide insight into the path we have travelled as a nation to overcome one of the most… 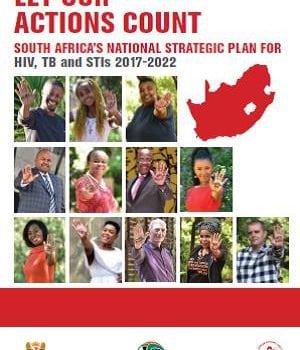 The 2020 edition of the South African Child Gauge released last week once again placed the spotlight on the country’s child hunger and nutrition crisis. Various specifics in the new budget being presented in parliament today will tell us how committed government is in addressing this crisis, writes Kathryn Cleary.