Calls in Mangaung to fix the healthcare system before implementing NHI

The dire state of healthcare services and facilities in the Free State are the main reasons some residents in Mangaung are sceptical that the implementation of the National Health Insurance (NHI) Bill will positively impact  their lives.

This was among a variety of views aired by residents at a public hearing on the NHI Bill that took place in Bloemfontein on Monday.

The Free State is the sixth province in which the Portfolio Committee on Health had its public hearings on the NHI Bill. In October last year the provincial Health Department in the Free State also held preliminary hearings across the province to make people aware of the Bill.

On Monday close to three-hundred residents joined MPs at the Kagisanong Community Hall to give and hear input on the Bill.

Many residents told the MPs there’s a need to first fix the ailing public health sector before NHI is implemented.

One resident, Sean Lakey was among those who voiced their opposition to the Bill and who said NHI must be properly managed. “The current situation, unfortunately, is one of the most degrading circumstances and sadly the staff isn’t doing their job properly,” Lakey said.

“We’ve got a lovely Bill on paper but the comprehensive needs of healthcare should be thoroughly addressed. We need to change government’s formula in terms of who’s appointed and making the decisions. We can’t be putting all the power into one person or a group. The people in charge are not going to run the NHI properly.”

Two healthcare workers present at the hearing said they believe some of the challenges they’re facing at their respective healthcare facilities will be resolved once NHI is implemented.

Staff Nurse at the Nelson Mandela Clinic in Edenburg outside Bloemfontein Thato Litsesane said she was at the hearing to get a clear understanding of the Bill. “What I know about NHI is that it’s government’s structure to bring quality healthcare services to everybody.”

A Nurse at Albert Nzula District Hospital based in Trompsburg Ntebaleng Mohapi believes the Bill will not only assist health workers but the community as well. “I don’t think government is delaying implementing it,” she said. “I think people must first understand the Bill very well before government can implement it,” explained Mohapi. She also questioned how government will be funding the Bill.

However, DA ward councillor David McKay believes the hearings do not reach everyone and not all people are able to participate. McKay said there should be public participation in every single town. Citing the country’s already dire financial state McKay said government does not have funding for the Bill.

“The proposed changes in the Bill put all the power under one Minister. He will then decide how everything is distributed, under a system that they currently can’t even control. The Bill should totally be scrapped. It doesn’t make sense,” he said. “You cannot take a system from another country and copy and paste it. It’s not feasible. As it is the current system isn’t working. They can’t possibly maintain the level of service that they’re giving now. It’s absolutely pathetic – people are dying in our hospitals. You’re not improving the system, you’re making it worse. They should focus on improving the current system and making sure that it works well.”

Funding of the Bill remains one of the main concerns raised by many who gave their input. Some predict the Bill could end up like other financially crippled State Owned Entities’ (SOEs).

DA member of the Free State Legislature Mariette Pittaway also raised her reservations. “They are still not saying who will be funding the rollout of the NHI. During the Medium-Term Budget [speech] Finance Minister Tito Mboweni said the state didn’t have funds, so where will the money come from? NHI will not bring better healthcare services, it will only cripple the private healthcare sector and the economy. This is such a good opportunity for corruption, just look at how they’ve handled the SOEs.”

Meanwhile, representatives from the Congress of South African Trade Unions (Cosatu) and the National Education, Health and Allied Workers’ Union (Nehawu) came out in support of the Bill. Cosatu’s provincial secretary Monyatso Mahlatsi however raised concern that the province has a fragmented healthcare system.

“In our view NHI is going to assist everybody to have access to quality healthcare. NHI is a healthcare system that is going to be centrally funded by government and private sector,” he said. “One of the issues we raised is about the current management in the healthcare sector. Managers can’t manage properly. They need to be properly empowered. Many managers can’t handle the little power and responsibility that they have and if that power is going to be increased, then there will be a problem. There is also a need for regulation of the pricing of medicines and pharmaceutical companies,” Mahlatsi added.

“NHI has humanity in it. Those who can, must assist those who can’t. I came to voice my support and ensure it goes through. In fact our view is that this is long overdue,” said Nehawu’s provincial Head of Organising Jabu Makhubo. “We call on government to firstly deal with a transitional period of fixing all challenges within the health sector. NHI can’t be introduced under the current state of affairs, it isn’t conducive. We’re also aware of those opposing the Bill and intending to go to the Constitutional Court. [To them] we are saying, whether or not the court rules otherwise, we want NHI and that’s the bottom line.” he said.

Meanwhile, Head of the Free State Health Department Dr David Motau said he had mixed feelings about the public hearing. Motau told Spotlight in an interview at the public hearing they’ve already known about most issues raised by residents and a situational analysis has been conducted to assess all challenges. He also claimed there is a plan to deal with all issues at various health facilities across the province.

“We have embraced the NHI Bill and it is our responsibility to deal with all the issues that were raised at this meeting. There’s a bit of uncertainty on whether this will work or not and it’s up to us to tackle all the challenges and restore everyone’s faith. We’re busy ensuring that we’ll be ready once the system is being implemented,” said Motau.

Portfolio Committee Chair Dr Sibongiseni Dhlomo said he was satisfied with the hearings in Mangaung. “While they (residents) expressed support for NHI, they highlighted that government must first fix the current issues in healthcare.” Dhlomo said government can also not ignore the views of those who fear that NHI might follow the same path as that of SOEs. “It is [the]Health [department] that must indicate that the anti-corruption forum launched by the President is going to assist getting these issues out of the way. It’s not like we don’t have money. We must find money. If we’re going to have this social solidarity plan to have all South Africans taken care of then government must look for money.”

Dhlomo said he expects the Bill to be compiled into a report by May or June this year and then be submitted to the Speaker of Parliament.

The next public hearings on the NHI is scheduled for the North West province from 30 January until 1 February.

*NOTE: This article has been updated to reflect Dr David Motau spoke to Spotlight in an interview at the public hearings.

Buthelezi EMS netted more than R15-million from two suspect back-dated price increases from the Free State Department of Health, apparently without much scrutiny. 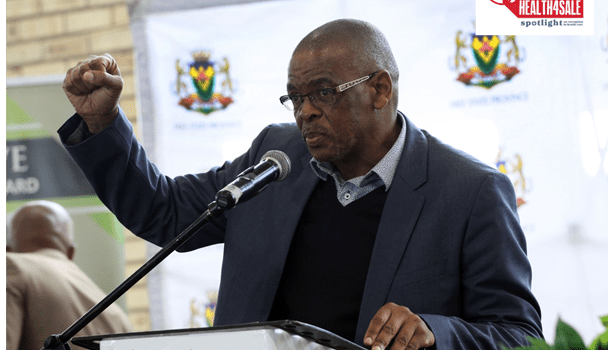 It has been two years since the National Mental Health Policy Framework and Strategic Plan (2013 – 2020) was released and very little progress has been made in realising the commitments made within its pages.