HIV in SA: Five graphs that tell the story

The recently published outputs of the Thembisa mathematical model of HIV in South Africa paint a remarkable picture of the history of HIV in this country. For the period from 1990 to 2015, we’ve plotted five graphs below using the estimates published on the Thembisa website. For all the graphs, a solid line indicates data which have been ‘matched’ against available survey data, while a dashed line represents data that are more uncertain as they are the Thembisa model’s projections or ‘best guesses’ based on previous trends in the data. 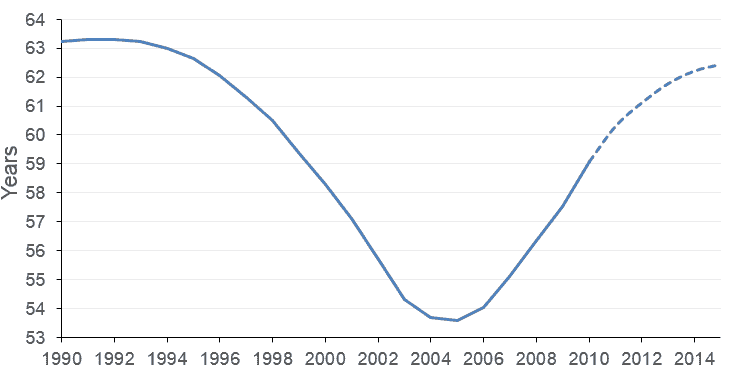 This graph shows life expectancy at birth in South Africa. It shows a dramatic drop to 53.6 as the HIV epidemic grew to its peak in 2005. The impressive increases since then has been attributed to the wide rollout of ARVs by the state (see next graph). This graph also makes it clear that, impressive as these increases are, they are mostly just a recovery to pre-HIV levels. Life expectancy in 1995 was 62; 20 years later in 2015 it was estimated to again be 62. 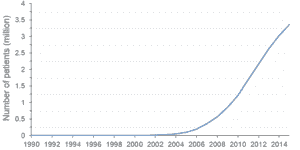 This graph shows the total number of people in South Africa receiving antiretroviral treatment. Comparing this to the previous graph, notice how dramatically life expectancy increased as antiretrovirals (ARVs) became more widely used from the mid-2000s. 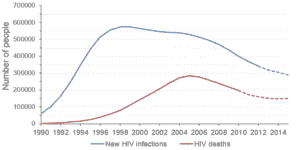 The blue line on this graph shows the number of new HIV infections in South Africa by year. The good news is that the rate of new infections is decreasing from its peak of around 570 000 per year at the turn of the century. The red line represents HIV deaths per year and shows that yearly deaths peaked in 2005 at around 280 000 and then started declining (note the similar time that ARVs became more widely used in the previous graph). Notice how the red line is lower than the blue line – in other words, more people are becoming newly infected with HIV than people are dying of HIV. The result of this, as we will see in the next graph, is that the number of people living with HIV in South Africa is increasing. (Not shown on the graph: by 2015 a total of around 3.5 million people have died of HIV-related causes in South Africa.)

4. Number of people living with HIV 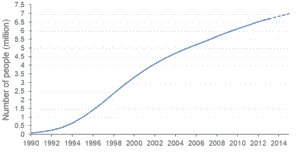 This graph shows the number of people living with HIV in South Africa. That this number is continuing to increase is both a bad and a good thing. As we can see from the previous graph, this effect is driven by the still high rate of new HIV infections (bad) and by the fact that people living with HIV are living longer and no longer dying at the same rates as before (good).

This graph shows HIV prevalence in South Africa. It is worth including here since HIV prevalence figures are often quoted in the media. Prevalence in this case is an indication of the percentage of the population who are living with HIV in a particular year. Prevalence is driven by the same forces driving the total number of people living with HIV (shown in the previous graph). The one key difference is that it also factors in that the total population of South Africa is growing. If you extend the model’s predictions into the future, HIV prevalence is expected to peak in 2016 and 2017 at 12.8% and then starts coming down slowly – but the total number of people living with HIV is only predicted to reach a peak of around 7.9 million during 2030.

By Professor Glenda Gray & Professor James A. McIntyre – HIV changed the nature of health in South Africa as our new democracy emerged. Seemingly overnight, in front of our eyes, young people and children died in unprecedented numbers. HIV slashed life expectancy, wiped out a generation of economically active adults in their prime across sub-Saharan Africa, reversed gains in under-five mortality and created a cohort of AIDS orphans.

Around one in ten of the over seven million people living with HIV in South Africa are not aware that they have the virus in their bodies. One way to ensure more people are diagnosed more quickly is to make HIV self-tests more widely available. Tiyese Jeranji looks at what HIV Self Testing is, how it is done, and what government policy is on this type of HIV testing.